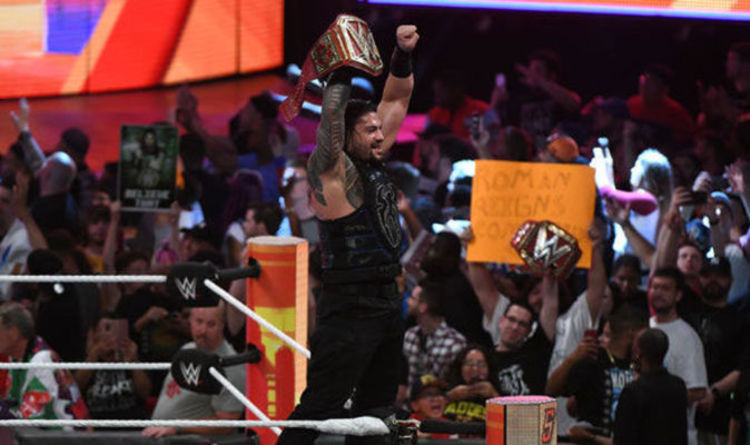 Reigns challenged Strowman to cash in his Money in the Bank contract tonight on RAW at the Scotiabank Arena in Toronto, Ontario but The Monster Among Men refused.

Mr Money in the Bank believes The Big Dog’s Shield brothers Dean Ambrose and Seth Rollins would interfere and help the champion retain in a Singles Match.

Therefore, Strowman challenged Reigns in a Hell in a Cell Match as that will prevent Ambrose and Rollins from getting involved in a bout that will see the two competitors locked inside a cell next month.

Strowman said: “I’m not cashing in tonight. Because you and I and everyone inside this arena know that if I did, your little boys would come down here and try to save you again.

“So I’m gonna make you a deal. I won’t cash this contract in until September 16th, all you gotta do is show up to the one place where your brothers can’t interfere with me taking your Universal Championship.

“Because you and I, we’re gonna go to war in a place we’ve never done it before.

“I’m gonna cash my contract in and I’ll see you in Hell in a Cell.”

Reigns accepted the challenge and seems to have agreed to leave his Shield brothers behind ahead of next month’s Pay-Per-View show.

He replied: “You’re finally starting to sound like a monster.”

The Big Dog successfully defended the title on RAW the next night against Finn Balor and Strowman tried to cash in his briefcase.

But The Shield’s signature music echoed around the Barclays Center in Brooklyn, New York and Ambrose as well as Rollins came out in full Hounds of Justice gear to the champion’s aid.

The Shield then put The Monster Among Men away with their signature Triple Powerbomb as they slammed him through the announce desk.

Strowman was left seething as he watched the reformed Shield walk up the ramp and is determined to get some revenge.

Lyon condemn Juventus to another exit despite Cristiano Ronaldo double