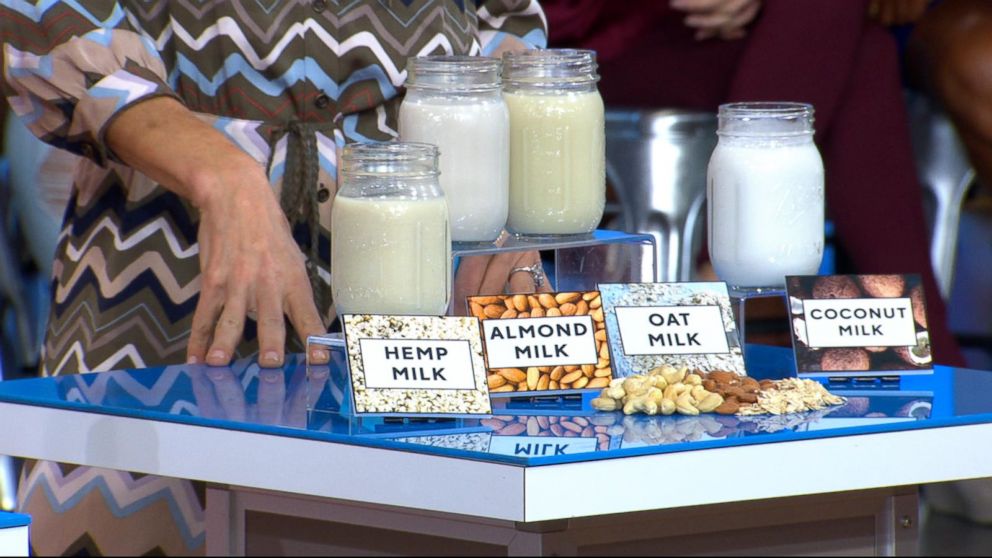 Transcript for Cow milk, soy, plant-based milk: Which one is right for you?

Wll get to our new series called supermarket sav withny options out there. Hodo you know which mil is the right milk for Yo we’lloot a of them and fami register nutritional dawnkss H with us to help us sift through th I’m glad we’re doing . Many in grocery E. So manyhoices and oftentimes you’re overwh so yoick the one you always pick T there are different milks ent people. O that’s what W go over. We’ll start with one person rightere named Nicholas. Stand U for us. Nicholas is oneof audience members. So nice to share with us, five ki that range from age from — that’sight for entire group? Yeah so what I would recommendou is cow milk and that’secause active people young peo and elderly people need the nutrition in cow milk. Protein and vitamind, potam, that’s what you’ll get iat a natural Sukut there is no sugar in milk. Oh. Hat’s right Isn’t that interesting know. What about looking at three here, one’s got no fat. I love the2% like a nice co a Litt is good. Inms of con, a top ei allergen andome for it’s hard digest. It might bear expensive. Again, if ye going to grab one of theow milks you say 2%. I 2. It’s a nice mpse. We’ll talk to Sara now. Right? So what kind of milk do you recommend for that? Okay,o watching calori you would go into thisuts a plants milk ande’s why. I like — the audience is great, right. They’re like, whoo, love it. Why. If you choose the unsweet version. It can be three times fewer calories than that like ikim milk which is great and oftentimes it has calciumnd vita Unsed is — like. Three times lesscalories. Da, , if you do get morealories so really the unsweetened is I that white sugar that gives you no nun. Th oor of con you justotopn mind compared to C milk it is a lot less protein and a lot L L potassb12. That’s again, something to take into consideration. Ffinally aspiring vegetari stand I like that. She’s worried about not innoughprotein which we just talked a a milk you, well. Beinge of an aspiring cow milk it has a of protein and fortifyt with calcium,itamind, possium, b12. It’ll get you that protein in terms of cons it could be a eight allergen fore and could more expensive than nd if you get the sweetenedin here, too much I’m gla just mentioned we want tove ithome three different choice, holly you guys found the Y B just to remind ot of added sugar at-based milks. How to avoid. Just pleaseook the at sweetened. Ik at the ingredients to make sure thes nosugar. Remember, even though milk has naturasugar, this added Suga ite sugar wit no nutrition so avoid. Good, . Got it. Got it.

Help! My Boss Is a Conspiracy Theorist

Coronavirus antibody: How many people have antibodies? How many are immune to covid?

Melissa McBride net worth: How much is The Walking Dead star worth?

Tale of a Classic SoHo Loft

Property prices map: How much is YOUR house worth after lockdown?

The Perfect Afternoon Snack Has Arrived