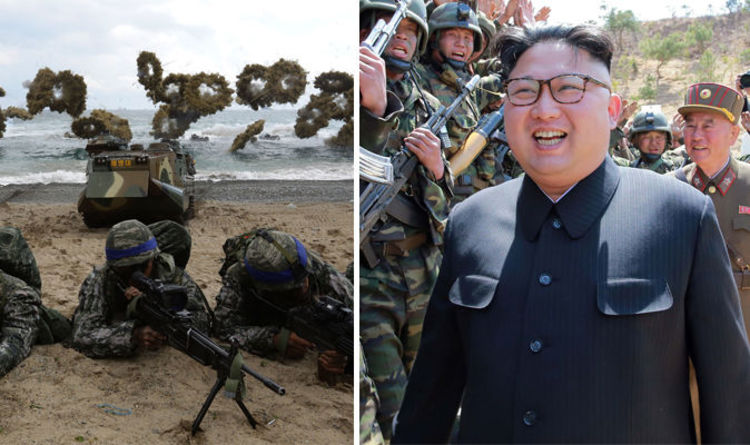 The shocking allegations were made by Rodong Sinmum, a North Korean newspaper which is controlled by the regime and reflects its viewpoint.

According to NBC News it claimed: “We cannot but take a serious note of the double-dealing attitudes of the US as it is busy staging secret drills involving man-killing special units while having a dialogue with a smile on its face.

“The US would be sadly mistaken if it thinks that it can browbeat someone through trite ‘gunboat diplomacy’.”

Reuters reports that the paper continued: “Such acts prove the US is hatching a criminal plot to unleash a war against North Korea.”

It added that such behaviour “deserves merciless divine punishment”.

The US Embassy in South Korea said it known nothing about the alleged drills.

Tensions between the US and the North Korean dictatorship were reduced after President Trump and Kim Jong Un held a face-to-face meeting in June.

After the meeting both countries signed an agreement saying North Korea would end its nuclear weapons programme in return for US “security guarantees”.

Shortly after the North Koreans handed over 50 boxes believed to contain the remains of US soldiers killing in the Korean War.

However over the past week relations have soured.

A visit to North Korea by US Secretary of State Mike Pompeo has been cancelled.

Trump tweeted: “I have asked Secretary of State Mike Pompeo not to go to North Korea at this time.

“I feel we are not making sufficient progress with respect to the denuclearisation of the Korean Peninsula.”

He also used Twitter to hit out at China claiming: “I do not believe they are helping with the process of denuclearisation as they once were.”

Archaeologists are digging for one of America's first Black churches