President Donald Trump on Tuesday alleged that Google’s search results for news about him and his administration are “rigged” to showcase too many liberal media outlets and too few “Republic/Conservative & Fair Media” sites.

“Google search results for ‘Trump News’ shows only the viewing/reporting of Fake New Media,” he said on Twitter, “96% of … results on ‘Trump News’ are from National Left-Wing Media, very dangerous,” adding that it “will be addressed.”

When asked if the administration believes Google searches should be regulated, the president’s senior economic adviser, Larry Kudlow, told reporters on the White House lawn Tuesday morning that “we’re taking a look at it,” but didn’t offer any details when pressed, saying it was “above my pay grade.”

White House press secretary Sarah Sanders later told NBC News that she was not aware of Kudlow’s comments, but said that the administration was looking into Google’s alleged search bias, and that she expected “something from the White House soon on this.” 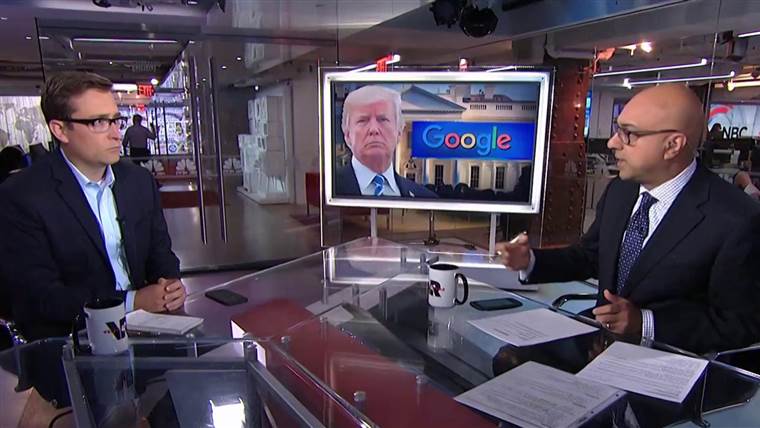 The president’s twitter blast Tuesday came a week before hearings are scheduled on Capitol Hill at which top executives from Google, Twitter and Facebook are to testify about the use of algorithms and content moderating. The use of algorithms has become a point of contention in the debate over the proliferation of fake news and over how Russian trolls get their content in front of more viewers, but conservative voices online and in previous hearings have also seized upon their use to accuse social media sites of ranking down their viewpoints.

Bolyard wrote that when she searched for “Trump” within Google News, within the first 100 results CNN appeared 21 times, The Washington Post and NBC News 11 times, while “right-leaning” sites like The Wall Street Journal appeared only three times and Fox News twice.

Besides those, “PJ Media did not appear in the first 100 results, nor did National Review, The Weekly Standard, Breitbart, The Blaze, The Daily Wire, Hot Air, Townhall, Red State, or any other conservative-leaning sites,” Bolyard wrote.

Based on her self-described “not scientific” research, “left-leaning sites comprised 96 percent of the total results.” That figure was quoted by the president in his attack on Google.

In a statement, Google denied employing any political bias in it search results.

“When users type queries into the Google Search bar, our goal is to make sure they receive the most relevant answers in a matter of seconds,” the company said. “Search is not used to set a political agenda and we don’t bias our results toward any political ideology. Every year, we issue hundreds of improvements to our algorithms to ensure they surface high-quality content in response to users’ queries. We continually work to improve Google Search and we never rank search results to manipulate political sentiment.”

Joe Balestrino, an independent search-engine-optimization expert, told NBC News in a phone interview that “trust” and “authoritativeness” are among the main signals Google considers when deciding how high to rank results in search and news.

Those qualities are determined by things like how many other news sites link to a website, how long users are reading a site, if the site links to external sources and how much the site or a given news story is being shared, he said.

It also considers whether a site has properly formatted its URLs and metadata and other technical considerations, the percentage of original content to be quoted or re-purposed, whether it’s opinion writing, and whether it has applied to be in the Google News program, he added.

“Google is smart enough to know if they serve up content and it’s not what they’re searching for, why would you use Google?” Balestrino said. “If Google was using all left wing or all right wing, it would alienate people from using the services.”

'There will be fireworks': Dillian Whyte and Alexander Povetkin promise an explosive WBC fight