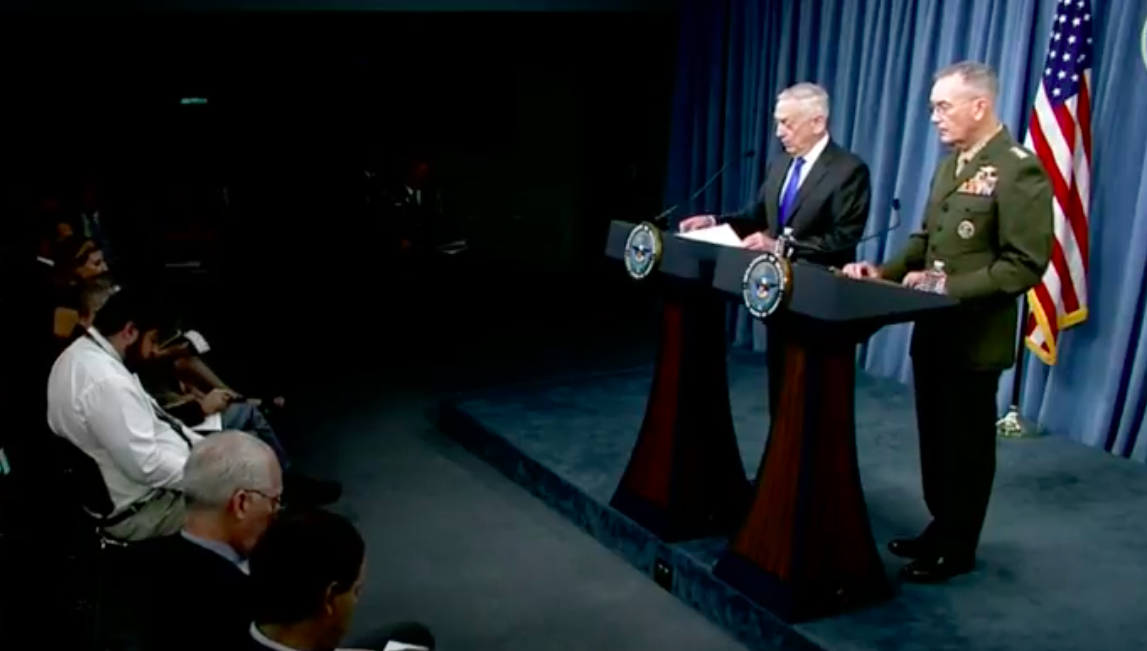 Mattis: DoD has been working with Congress “on the way ahead with regard to needed legislation for a separate department.”

WASHINGTON — The Defense Department is moving ahead with previously announced plans to stand up a four-star U.S. Space Command as part of a broader effort to reorganize military space forces, Defense Secretary James Mattis said Tuesday at a joint news conference at the Pentagon with Chairman of the Joint Chiefs of Staff Gen. Joseph Dunford.

Congress in the 2018 defense policy bill directed DoD to create a “sub-unified” Space Command under U.S. Strategic Command, but the Pentagon has proposed taking this a step further and forming an independent U.S. Space Command to “improve and evolve space warfighting, including integrating innovative force designs, concepts of operation, doctrines, tactics, techniques and procedures,” DoD explained in its proposal submitted to Congress Aug. 9.

Dunford said he met on Monday with “key leaders in the department” to work through the details of the Space Command reorganization. “We are still a few months away from standing up that command,” he said. Presumably most of the resources and personnel would come from Air Force Space Command.

The creation of U.S. Space Command does not go far enough, however, to fulfill President Trump’s order to stand up a sixth branch of the military, a Space Force, with its own civilian leadership. Mattis said DoD has been working with Congress “on the way ahead with regard to needed legislation for a separate department.” A cost estimate for the new department is in the works.

Mattis has long opposed creating a new military service in part because of the costs associated with a new civilian bureaucracy. He changed his stance in recent months after Trump indicated this was not up for debate. Vice President Mike Pence is now overseeing the reorganization and the implementation of the president’s directive.

“We have worked with Congress and the White House to define the evolving space problem that we confront,” Mattis said on Tuesday. He noted that a unified Space Command is “in line with the president’s vision” of a Space Force. DoD also is “revising our vision for defending our assets in space and revising antiquated space acquisition processes,” Mattis said.

Pence said in a speech Aug. 9 that the president wants DoD to appoint an assistant secretary of defense for space to oversee the transition. Pence noted that the goal is to have a Department of the Space Force with its own civilian secretary by 2020 — a new military service that would be co-equal with the Army, Navy and Air Force. But DoD did not include this in its Aug. 9 proposal to reorganize space forces.

The Congressional Research Service said in a recent report that many lawmakers are confused because the Defense Department and the White House are not speaking with a single voice on what a Space Force should be. “Inconsistencies between these various executive branch proposals have puzzled some observers and Congress could play a major role in adjudicating among them,” CRS said. “Given the long-standing nature of the debate over how space assets should be managed, some observers view recent proposals as initial positions in a longer-term negotiation.”

On Capitol Hill, the dynamics surrounding the Space Force could be shifting. The Republican-led House has been a proponent of a separate branch of the military for space whereas the Senate has rejected the idea. If Democrats retake control of the House in November, support for the Space Force could evaporate. The Senate could go either way, based on recent comments by Sen. James Inhofe, R-Okla, who has been at the helm of the Senate Armed Services Committee in the absence of long-time SASC chairman, the late Sen. John McCain.

Inhofe told Congressional Quarterly that he would hold hearings on Trump’s Space Force plan even though he opposed the idea when the House voted for it in the 2018 defense authorization bill. “If we’re gonna have [Space Force],” Inhofe said, “let’s go ahead and get on with it.”

Op-ed | Materials that could bring life to Mars