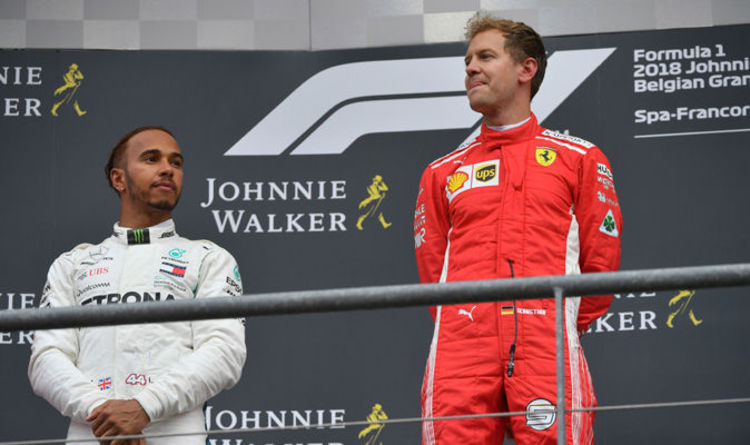 Hamilton had grabbed pole in a dramatic dry-wet qualifying session on Saturday but Vettel passed him on the Kemmel Straight to lead after one lap and the German never looked back.

The Brit could only finish second and his Ferrari rival now trails him in the F1 World Drivers’ Championship by just 17 points with eight races remaining.

And Hamilton was left scratching his head by Vettel’s dominance during the race and claims he can only “hope” things improve at next weekend’s Italian Grand Prix at Monza.

“It’s definitely going to be very tough going into the next race. Ultimately, Ferrari just did a better job all weekend,” Hamilton said.

“It’s difficult to say how they’ve done a better job – it’s just that they were faster, simply faster.

“If you look at last year they were faster here also, and we just managed to hold them behind.

“Their power is obviously a lot better than it was last year.

“They sailed past us at the start and their overall pace was stronger, I couldn’t match it.

“Naturally, that’s not great for us – but I’m hoping we’ll be better next race – maybe the deficit isn’t as big as it was here.

“I’m hoping that our package suits that track a bit better than it did here.”

Both Hamilton and Mercedes remain top of the standings, with the team’s Constructors’ Championship lead now at just 15 points despite Kimi Raikkonen retiring after a puncture and sustaining damage to the floor of his car.

The Italian Grand Prix is Ferrari’s home race but Hamilton spoiled the party by triumphing there in 2017.

But the F1 circus then heads to Singapore, where Vettel was fastest in qualifying but was involved in a first-lap crash with Raikkonen and Max Verstappen that ultimately ended all three drivers’ race.

And Hamilton knows he was fortunate to take victory at the street circuit in 2017 and cannot expect a repeat.

“In Singapore last year I think they were on the front row, so that’s probably going to be the case there,” Hamilton added.

“But there are still other races that we can be particularly strong.

“It’s at the point where we just have to maximise our weekends and capitalise if we’re not quickest.

“We have done that in the previous two races before this.

“We capitalised on some of their misfortune and just doing a better job in the circumstances.

“The pendulum has swung a little bit.

“I would say the last two races in particular we just did a better job.

“The cards we were dealt with, we did a better job with them – even though they had a better car. We’ve called their bluff almost.

“We’ve just got to keep at it. I truly trust and believe in my guys. We all feel the ups and downs together.

“You can’t win them all, but this next run of races is going to be really telling.

“The next two or three races will really show if they’re going to continue to sustain that high performance, or that’s more tooth and nail.”