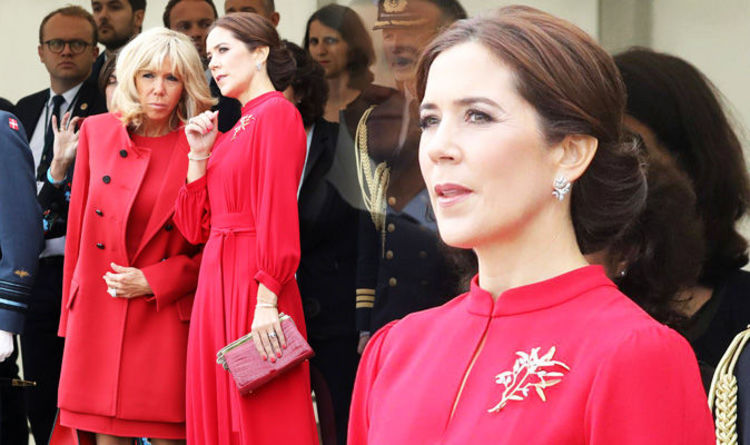 The stylish pair matched in red today as they attended the same event.

They were joined by their husbands at a wreath-laying ceremony.

The event took place at the monument for fallen soldiers at the Citadel in Copenhagen.

Both women showed off their chic style at the event, with Crown Princess Mary stunning in a midi dress.

The high neck number had a tie at the waist and subtle balloon sleeves.

Brigitte, on the other hand, wore a red dress with a peacoat in a matching hue.

She added a corresponding bag and black patent heels.

The two women chatted happily away together at the military event.

Crown Princess Mary of Denmark stunned, dressing like a medieval maiden with her family recently.

The Australian royal, who is 46, was visiting Tórshavn in the Faroe Islands.

The French First Lady is known for showing off her fabulous legs.

Brigitte Macron wore shorts on a cycle ride in France.

Brigitte donned a tiny pair of shorts today in a clingy lycra material which showed off her figure.

The look showed off her long, slim legs as she rode out on her bike. Her skin on show was deeply tanned and glowing.

More Than Just a Summer Crush

What to Know About Your Used Car

Coronavirus UK: The natural supplement shown to lessen the impact of the virus

Connecting on a Rooftop

How to Keep the Peace in a School Pod

A Candlelit Proposal for a Couple Used to the Spotlight

Poll: Half of registered voters say whoever wins the election should pick RBG's replacement