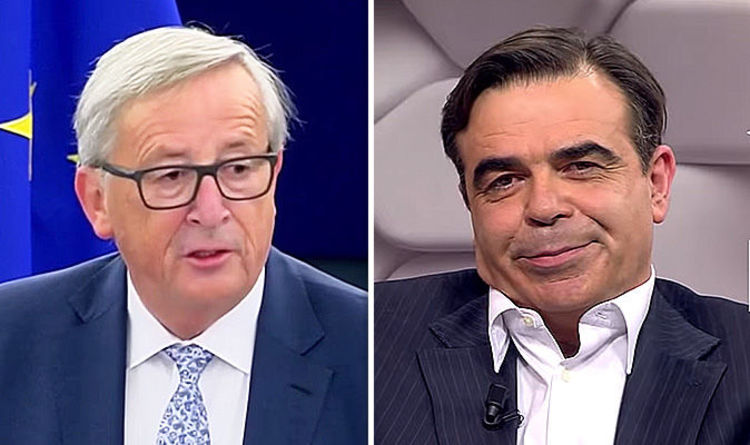 European Commission spokesman Margaritis Schinas reviewed European Union and international leaders as part of a candid interview looking at those who work in the Brussels bloc.

Asked to rate world leaders in a word or brief sentence, Mr Schinas appeared to have much faith in EU leaders – especially Angela Merkel and Emmanuel Macron.

In a video filmed on behalf of the Commission, the top spokesman said: “Mrs Merkel, an anchor of stability. Theresa May, an honest politician trying to do her best of a difficult situation.

Asked about Turkey President Recep Erdogan, Mr Schinas temporarily struggled to find the words to describe him but settled for “a neighbour but a difficult one.”

Up until the constitutional referendum in 2018 Turkey was on track to become a full member of the EU but talks have effectively stopped. Ankara and Brussels have since locked horns on different issues, including the threat of a trade war with President Trump.

Continuing his review of international leaders, the EU civil servant conceded that “democracy is always right” when talking about Italian Interior Minister Matteo Salvini but it appeared the interview had reached a sore point.

Mr Salvini only last week threatened to withhold budget contributions to the EU until Brussels agreed to dial up efforts to help the Southern European state manage the arrival and redistribution of migrants and refugees.

Reaching the conclusion of the interview Mr Schinas was also asked to rate his boss, Jean-Claude Juncker, and another key player in EU politics, French President Emmanuel Macron.

The civil servant also took time to explain how he had come to work for the Commission, claiming that he felt it was “the call of my generation” to serve in Brussels.

He concluded: “When Greece joined the European Communities I was about to enter university. I felt that this was the call of my generation, I’m a believer. I didn’t come for the salary. From the very start, I thought this was a generational call for someone my age.”

Coronavirus spread largely among under 40-year-olds in France, minister says

Belarus: What lies behind the protests?

Arkansas jogger, 25, is found murdered near her home two days after she went missing

How to make cauliflower rice