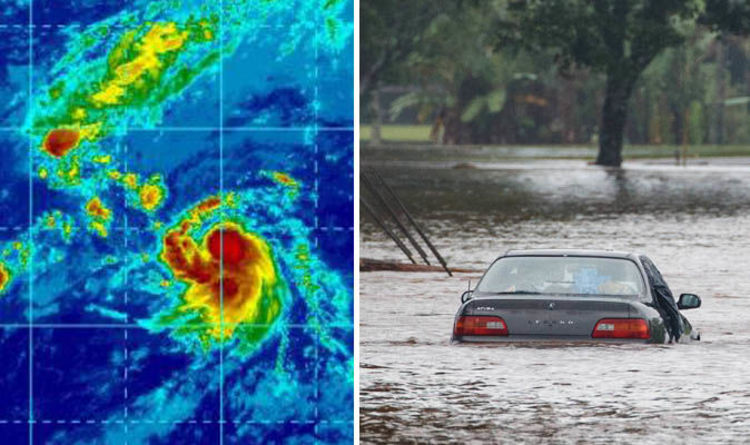 The storm is currently southwest of the Hawaiian islands and the National Weather Service forecasters say the cyclone will intensify into a hurricane.

It is moving west and forecasters predict it will intensify into a Category-2 hurricane and have sustained winds at an estimated 100mph (160kph) by 2pm Hawaii time (1am BST Wesnesday).

This weather system will continue to gain strength throughout the week, with the Hawaiian islands are still recovering from Hurricane Lane.

The storm punished the Big island and East Maui with torrential rain and landslides.

It dropped more than 101 centimetres (40 inches) across parts of the Big Island, which lead to catastrophic flooding, as reported by AccuWeather.

Hurricane Lane was downgraded to a tropical storm on Friday afternoon local time after its’ outer bands battered parts of Maui, but the weather is not expected to improve..

AccuWeather Senior Meterologist Brett Anderson said: “The most numerous downpours that follow Lane are expected to be over the typical windward locations on the Big Island and Maui County.”

Tropical Storm Miriam continues it western trek across the Eastern Pacific but is expected to miss the Hawaiian Islands.

It will make a sharp turn north before it reaches the islands due to an extended area of low pressure, according to forecasters from the National Hurricane Center in Miami.

Tropical storm-force winds extend up to 60 miles (96 km) from the centre.

The National Hurricane Centre in Miami forecasts the storm slowing and making a turn toward the north-northwest later this week, reaching the Central Pacific early on Thursday.

The five-day forecast track shows Miriam weakening back to a tropical storm as it moves north over cooler water far from the Hawaiian islands.

However, Tropical Storm Miriam may bring choppy seas to the east-and-north-facing beaches later this week.

Residents of Hawaii are advised to stay alert and to remain vigilant for any additional threats from tropical storms and hurricanes for the rest of this year’s hurricane season.

Gold slips as dollar recovers; all eyes on Fed meeting

Oregon fire marshal RESIGNS after being put on administrative leave