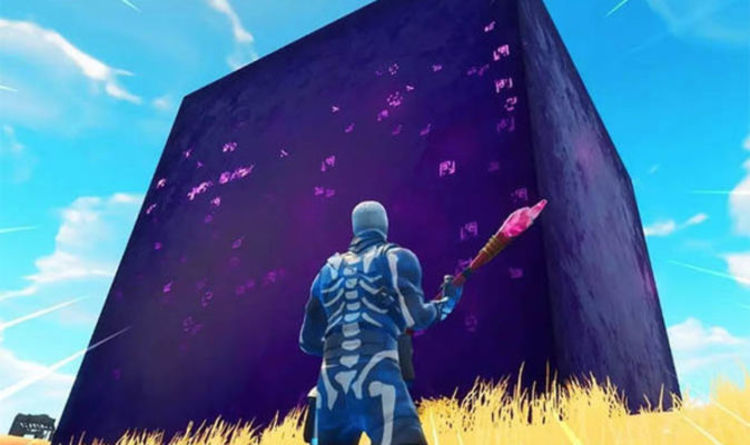 The latest attempts in cracking the Fortnite Cube mystery continues this week.

It’s hard to miss the slow-moving purple object in the sky, which looks set to change things up during season 5.

Most fans will be thinking back to the launch of the rocket, and how that led to the significant changes at the end of season 4.

This included a live in-game event which included the Fortnite rifts opening up for the first time.

And it appears the timing of the new Fortnite Cube correlates closely with big events in past seasons.

There’s a whole Reddit thread dedicated to tracking the purple cube, with a lot of players trying to work out where it might be heading.

Some believe that will include Loot Lake, although others are taking more novels ways to try and crack the mystery.

Some players have managed to get into the Fortnite Cube, which unfortunately didn’t provide many more clues.

The inside was pretty boring and didn’t include any new earth-shattering information.

It’s obvious that players aren’t supposed to be trying to glitch into it, at least not right now.

From what players have found out so far, the cube is moving at certain intervals each day.

This looks to be every 1hr and 43 minutes, although it’s likely that this will change frequently.

It has also been confirmed in Playground Mode that the cube destroys player builds when it does move.

There’s also the question of how the new Enforcer characters fit into this, having been leaked as the new Road Trip skin earlier this month.

Could it be that the Enforcers has arrived to fix the mess the Visitor caused? Or is he just another character that’s going to make even more trouble across the island?

Some players are hoping that this fits into some of the Viking themes released by Epic Games, perhaps in connection with a Ragnarok-type event.

But like with past seasons, fans will likely have to wait and see just how the Fortnite Cube will interact with the map next.

And if indeed there is going to be another live in-game event, you can be sure that Epic Games will share some kind of clue so fans can be ready for it.

The Fortnite cube is covered in mysterious symbols, and if Battle Royale players stand near it, it charges up their shield.

Elsewhere a new Fortnite map location could have been leaked which may tie into the Fortnite cube event.

Beatles members: How many members of Beatles have there been? Was it always four people?

Hyrule Warriors: Age of Calamity Has a Zelda Problem