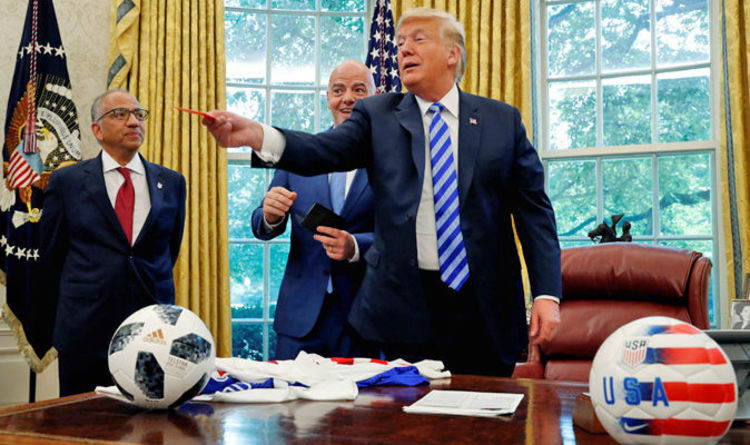 The USA will host the World Cup in 2026 alongside neighbours Mexico and Canada.

FIFA have ambitions to expand the World Cup to 48 teams for the tournament, which will largely be stated in the US.

As preparations for the tournament get underway, FIFA president Infantino visited the White House to discuss a plan of action with Trump.

But in a slightly staged photo opportunity, Trump got out the red card to jokingly threaten the press with it.

Infantino showed Donald Trump a referee’s card book. He said: “Referees, they have cards. Yellow cards and red. A yellow card is a warning. And when you want to kick out someone, it’s a red.”

Trump grabbed the red card from Infantino’s hand and, amid laughter from around the Oval Office, made to throw the card at the press gaggle in front of him.

He then dropped the card, before Infantino signalled the correct way to send someone off is to brandish the card in the air.

Infantino then said: “This could be useful for you, I don’t know. It’s for you.”

The triple bid from the USA, Canada and Mexico beat single-bidders Morocco for the rights to stage the 2026 World Cup.

World Cup hosting rights have come under the spotlight in recent years, with allegations of corruption rife among FIFA members.

In 2010, both the USA and England lost out on efforts to host the 2018 and 2022 World Cups, with FIFA awarded the rights to Russia and Qatar.

That led to an investigation – headed by the FBI – which led to the downfall of then-president Sepp Blatter.

The USA are also staging the Olympic Games in the next decade but that event – in Los Angeles – is not until 2028.

The IOC confirmed the next two Olympic and Paralympic games after Tokyo 2020 would go to Pairs and Los Angeles.

The USA bid then declared they were surrendering their interest in the 2024 date, meaning Paris will be next in line after Tokyo.

Premier League football without crowds: what is it really like?