WASHINGTON — Bruce Ohr, a career Justice Department official who’s become a major target of President Donald Trump amid his biting criticism of federal law enforcement, is facing off with congressional investigators behind closed doors Tuesday as part of a GOP-led inquiry into the origins of the Russia investigation.

Ohr, who most recently led the Justice Department’s organized crime and drug task forces, has come under scrutiny by Republicans for his relationship with Christopher Steele, the former British intelligence officer who conducted opposition research on then-candidate Trump. Ohr’s wife, Nellie, is also an employee of Fusion GPS, the firm who commissioned Steele’s so-called dossier on behalf of the Democratic National Committee and the Hillary Clinton campaign. 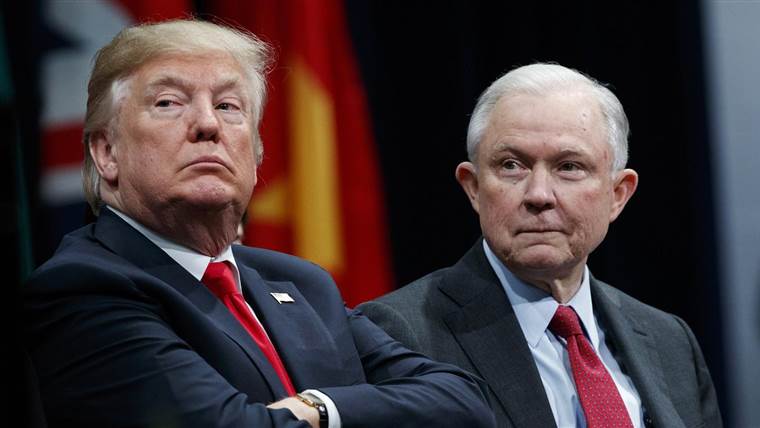 Even as focus has turned to new developments involving longtime Trump fixer Michael Cohen and potential cooperation from other key players in Trump’s business empire, the president’s allies in Congress have continued their own probe into whether political considerations influenced the Justice Department and its decision to open a counterintelligence investigation against Trump in the summer of 2016.

Ohr has been a leading target of key Republicans like House Intelligence Committee Chairman Devin Nunes, who first sought an interview with Ohr as he also subpoenaed the Justice Department last summer for documents related to the Steele dossier and whether it contributed to a secret surveillance warrant application against Trump foreign policy adviser Carter Page.

A controversial memo authored by Nunes’ staff on the Intelligence Committee and released earlier this year noted contact between Ohr and Steele in the fall of 2016, in which Steele expressed that he was “passionate about [Trump] not being president.” The memo also said that Ohr’s prior relationship with Steele and his wife’s employment by Fusion GPS was “inexplicably concealed” from the FISA court.

Democrats on the committee countered that the Nunes memo’s references to Ohr were “misleading,” and that there was no indication that Ohr was involved in the Page FISA application. But Republicans still allege that Ohr may have been acting as a backchannel to the FBI on behalf of Steele, whose relationship with the agency was terminated after he reportedly met with members of the news media to discuss his work on Trump and Russia.

Ohr is appearing before the House Judiciary and Oversight Committees’ joint task force on the Russia probe. The same entity both privately and publicly questioned former FBI agent Peter Strzok, who oversaw the Clinton email investigation and the early stages of what would become the Mueller probe. Strzok testified in July that the FBI did receive “documents and material” from Ohr in connection with its investigation, though he would not specify whether they came from Steele.

Though the House is in not in session, several of Trump’s top allies on the House Judiciary and Oversight Committees returned to Washington for Tuesday’s interview.

“I think it’s really important for us to establish a timeline regarding Bruce Ohr’s activities and Nellie Ohr’s activities,” said Rep. Matt Gaetz, R-Fla., one of the lawmakers who returned to Washington for the interview. “There’s a lot we don’t know about when Bruce Ohr learned that his wife was working with an agent of a foreign government to destabilize a presidential election and potentially a presidency.”

“We realize now that it was not just a casual contact, that he was having multiple contacts,” he said.

Trump has included Ohr on his list of former administration officials who should have security clearances revoked. The president has also tweeted that Ohr should be fired for his role in “helping to create the phony, dirty and discredited Dossier.”

Will Bruce Ohr, whose family received big money for helping to create the phony, dirty and discredited Dossier, ever be fired from the Jeff Sessions “Justice” Department? A total joke!

Former CIA Director John Brennan said Tuesday that it was his understanding that everything Ohr did was “approved and known to senior Department of Justice officials.”

“I don’t know all the facts here. But I think some of the facts that are being purported by some members of Congress may not, in fact, be the actual facts,” Brennan said in an interview on MSNBC.

Disney to layoff 28,000 employees as coronavirus continues to decimate its theme parks

Judge allows US suit against Libyan commander to move ahead

Meghan Markle says she doesn't focus on 'criticism or flattery'

Young bear siblings play fight while mum's back is turned