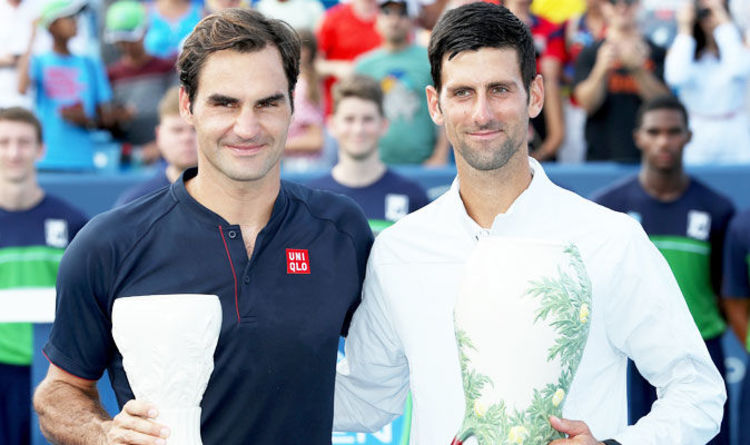 The five-time champion is searching for his first triumph at Flushing Meadows since 2008 and exited at the quarter-final stage last year.

After taking a break following Wimbledon, the Swiss legend lost to a resurgent Novak Djokovic – who completed the clean sweep of Masters 1000 titles – in the Cincinnati Open final.

Federer is chasing a 21st Grand Slam title and he could face Djokovic if the pair reach the last eight in New York.

Before that, he could take on Australian Nick Kyrgios in the third round.

While the world No 2 is looking to click his second Major of the year, he insists he doesn’t feel as much pressure as the rest of the field.

He said: “It’s the last opportunity for everybody to win a slam [this year] – thankfully I already have one.

“So I feel at least like I can go into the US Open with less pressure, in my opinion, because I think it’s a good thing to look at this US Open as not having to win it, wanting to win it too badly because I’ve not won it for 10 years so I have some work to [do] myself.”

Federer also predicts that the US Open will be very exciting due to the number of likely contenders for the title, as well as players looking to rediscover their form.

“Maybe not playing at 100 per cent yet, but they’re all very close and they still have room to improve.

“Then it’s nice to see Rafa [Nadal] in good shape, I’m playing well, so I think the US Open announces itself as a very exciting one and difficult one to win.”

Nadal – who is the reigning US Open champion – opens his defence against friend and compatriot David Ferrer.

Reacting to the draw, he said: “We were in the Davis Cup team a lot of times, here too. He’s a good friend.

“He has been an amazing player for such a long, long time. This year he’s going through tougher times but he’s still a player with a very high level of tennis. I’m looking forward to playing that match so we’ll see.

“I don’t go crazy about the draw. I really don’t care.

“I understand it’s luck. At the end of the day, you will face your opponent.”

After early Slam defeats, Thiem relieved to be in second round