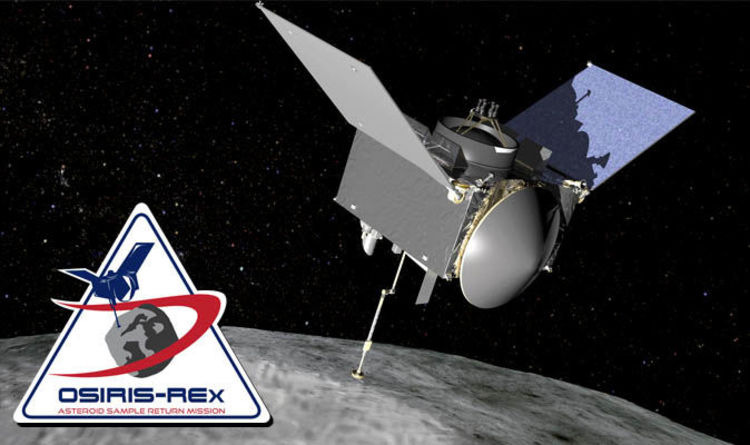 On Friday, August 17, the NASA spacecraft entered the Approach Phase of the incredible mission.

NASA tweeted: “Today, after a nearly two-year journey I begin Asteroid Operations and my final approach toward Bennu.”

The NASA probe is scheduled to rendezvous with Asteroid Bennu’s orbit on December 3 this year.

But the deep space probe has already begun imaging the distant asteroid, beaming back information to NASA scientists back on Earth.

The Origins, Spectral Interpretation, Resource Identification, Security-Regolith Explorer – or simply OSIRIS-REx – is the US space agency’s first deep space mission to retrieve an asteroid sample back to Earth.

The space probe blasted off into space on September 8, 2016, and operations will continue until March 21,2021.

Thereafter the spacecraft will return to Earth with a piece of the giant asteroid on board.

NASA said: “The spacecraft’s official arrival at Bennu is scheduled for December 3, 2018, when OSIRIS-REx transitions from flying toward Bennu to operating around Bennu.

“While at the asteroid, OSIRIS-REx will survey and map Bennu, navigate in close proximity to the asteroid, and ultimately touch the surface for five seconds to gather a sample of the asteroid.”

Three nitrogen gas canisters on board the spacecraft will ensure OSIRIS-REx can attempt up to three sampling attempts to collect enough asteroid material.

To ensure everything goes according to plant in December, NASA has planned a minimum of two rehearsals before the crucial five second approach.

The NASA spacecraft will practice leaving its orbit and dip to about 410 feet (125 m) above the surface of Bennu.

Both attempts will give NASA and OSIRIS-REx the opportunity to verify the space probe is on-course to collect asteroid samples.

A quarter of the collected space rock will remain at NASA’s labs and the rest will be donated to scientific institutions around the world.

How to watch OSIRIS-REx mission briefing live online this week

On Friday, August 24, NASA will host a media briefing on the OSIRIS-REx mission to share its latest status update.

Audio of the teleconference will stream live online on NASA Live.

Interested audiences have been asked to submit questions to NASA’s asteroid experts over Twitter via the hashtag #askNASA.

Devin Patrick Kelley, the man officials have identified as the suspect in a mass shooting at a Texas church that left at […] LONDON — For hundreds of years, through plagues and other pandemics, people used to believe that disease was spread not through droplets […] From Popular Mechanics One of the two candidates to replace the UH-60 Blackhawk helicopter has started ground tests. The SB>1 Defiant uses […]