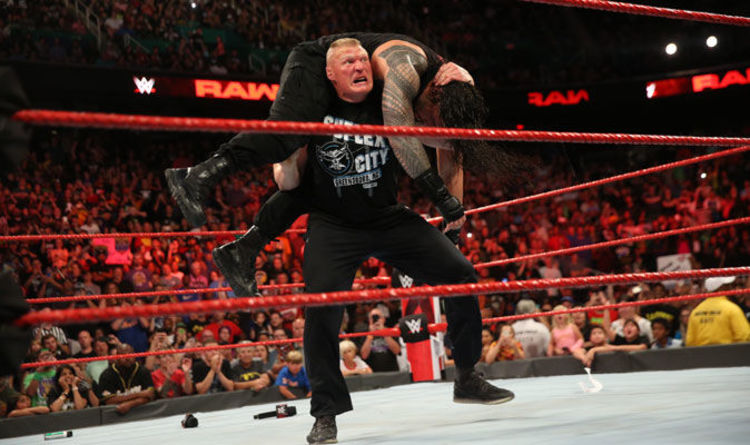 The show takes place this Sunday (August 19) at the Barclays Center in Brooklyn, New York.

The Kickoff pre-show will begin at 10pm in the UK and 5pm ET/2pm PT.

The biggest WWE Pay-Per-View event of the summer will be available for £19.95 on Sky Box Office with live or repeat viewing.

Fans can also watch it on the WWE Network for £9.99 per month with a free month trial if you subscribe immediately.

You will also be able to follow the action on Express Sport’s LIVE RESULTS page.

Brock Lesnar will defend the Universal Championship against Roman Reigns ahead of his expected UFC clash with Daniel Cormier.

AJ Styles will put the WWE Championship on the line against Samoa Joe in a very promising bout that could steal the show.

Ronda Rousey will return to the ring and face Alexa Bliss for the RAW Women’s Championship in a highly-anticipated match that fans have been wanting to see since June.

Dean Ambrose made a huge return on RAW after being sidelined for eight months due to an injury and reunited with old Shield team-mate Seth Rollins.

Ambrose will be in Rollins’ corner when he takes on Dolph Ziggler for the Intercontinental Championship and will be keeping an eye on the champion’s henchman Drew McIntyre.

Carmella will defend the Smackdown Women’s Championship against Charlotte Flair and Becky Lynch in a Triple Threat Match after overcoming Asuka.

Shinsuke Nakamura will put the US Championship on the line against Jeff Hardy in a match that could see Randy Orton launching another savage attack on the challenger.

Daniel Bryan will face The Miz and the two Smackdown superstars will reignite their rivalry that started in 2010 when Bryan joined WWE and was mentored by The A-Lister at NXT.

“Patience,” Mose Masoe eventually says as he looks at his little garden outside Hull and finds the right word to describe the […] The revamped format would see Leon Smith’s side play five matches back-to-back to reclaim the trophy they won in 2015. The double […] That is the view of NBA expert Jonathan Tjarks. The Lakers have been chasing a trade for the New Orleans Pelicans star, […]