The colourful rings spinning in orbit with the gas giant are easily Saturn’s most famous and easy to spot feature.

Scientists at NASA have spent more than a decade studying the mysterious rings thanks in no small part to the Cassini–Huygens mission, launched in 1997.

The USA spacecraft has beamed thousands of images back to Earth during its 20-year-long tenure and its pictures of Saturn are perhaps the most stunning.

Saturn’s rings are mostly made up of icy water particles ranging in size from smaller than a grain of rice to as large as towering mountains.

In NASA’s latest photo, you can clearly see the gaps between each individual ring, showing the amazing degree of translucency the structure has. 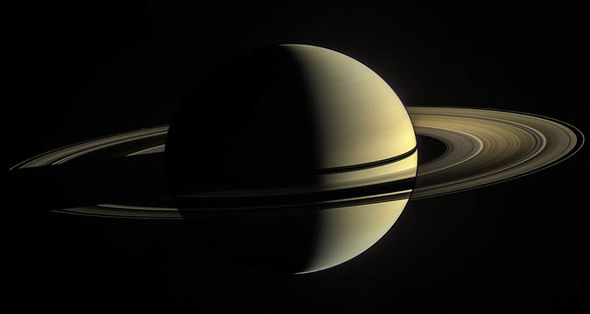 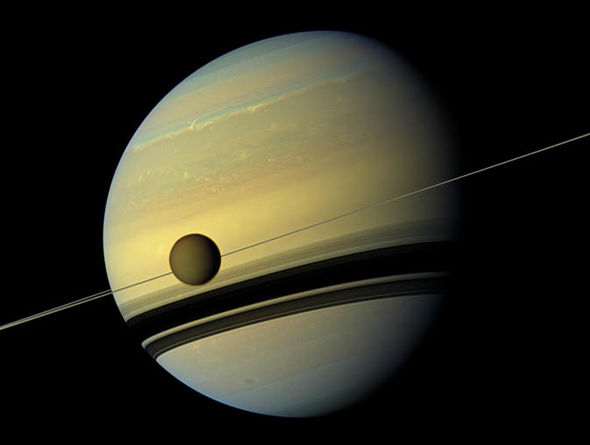 Saturn pictures: The planet’s rings are only about 30 feet thick in most places (Image: NASA)

The even spacing between the rings is such that, when observed from Earth, they appear to be at a standstill.

NASA explained: “The planet spins more than twice as fast as Earth does, completing a station every 10 hours.

“As Saturn rotates, so do its rings.”

But the ring material is so evenly spaced out you cannot actually see the rings rotating around Saturn.

What is even more amazing about the icy rings, according to NASA, is they are “razor-thin” and only about 30-feet thick (10m) in most places.

NASA said: “From the right angle you can see straight through the rings, as in this natural-colour view that looks from south to north.

“The Cassini spacecraft ended its mission on September 15, 2017.” 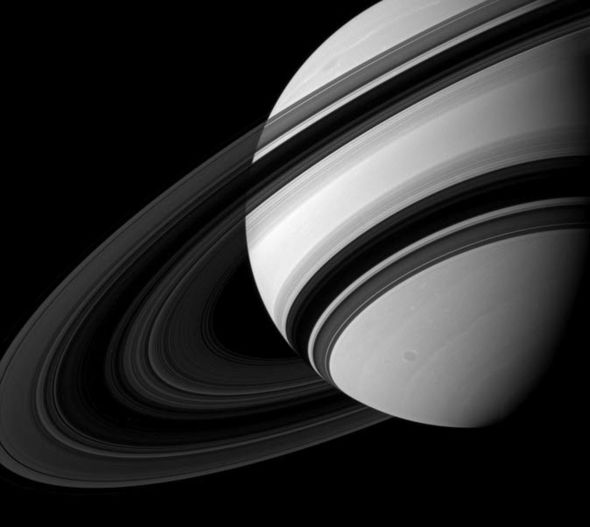 Saturn pictures: The planet’s rings are made of icy water particles in various sizes (Image: NASA) 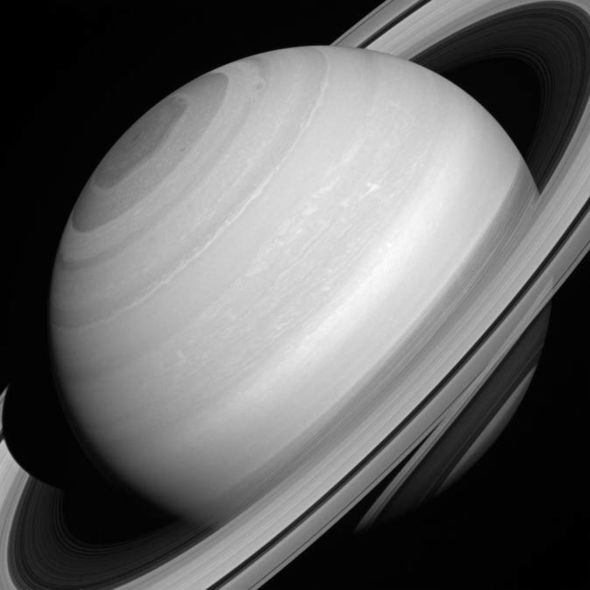 Saturn pictures: The gas giant is the sixth planet in our solar system (Image: NASA)

On July 16, the US space agency shared another incredible image of Saturn taken by Cassini on January 2, 2010.

The planet spins more than twice as fast as Earth does

The stunning Saturn picture shows the stark difference between daylight and night time on the ringed planet.

The dayside of Saturn is fully illuminated by the Sun’s rays, revealing its features in close detail.

The other side of the planet is shrouded in complete darkness with the visible outline of Saturn’s shadow falling onto its rings. 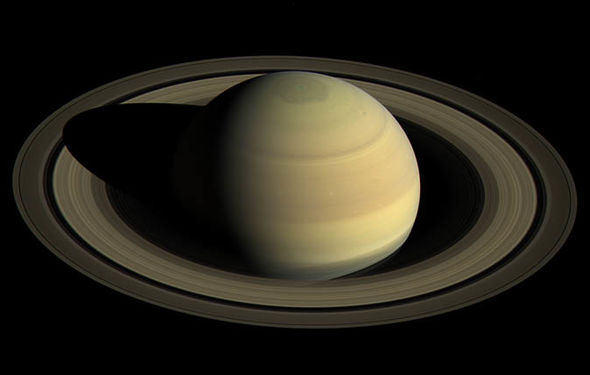 Saturn pictures: The gas giant spins more than twice as fast as Earth does (Image: NASA) 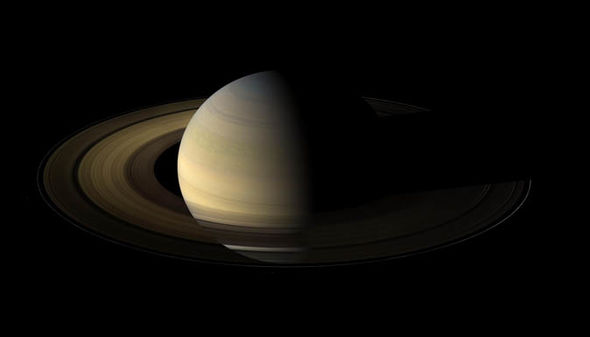 Saturn pictures: The planet’s rings extend up to 175,000 miles from the surface of Saturn (Image: NASA)

Saturn pictures: Some of the ring’s particles are as big as mountains or small as grains of rice (Image: NASA)

The natural-colour view of Saturn was snapped by Cassini’s narrow-angle camera from a whopping distance of around 1.4 million miles (2.3 million km).

Here is a selection of some of Cassini’s best photos of Saturn and its many features but the whole repository of NASA photos can be found online.

NASA’s Hall of Fame gallery of Cassini pictures contains some of the most beautiful and out of this world pictures taken in the solar system.

During its 13-year-long orbit of Saturn, Cassini photographed just about anything from Saturn’s rings, to its storms and moons.

You can also trawl through a treasure trove of untouched, raw images snapped by Cassini between February 20, 2004, and the end of its journey on September 15, 2017, by visiting here. 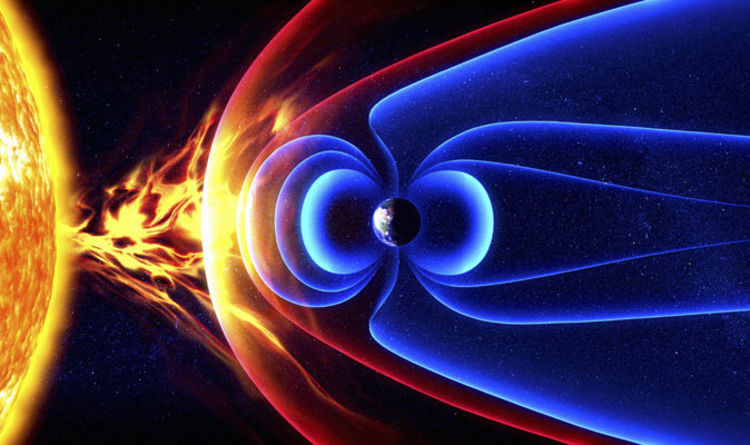 The country could be blunged into a blackout because it is not prepared enough for solar storms, the Met Office told ministers. […] 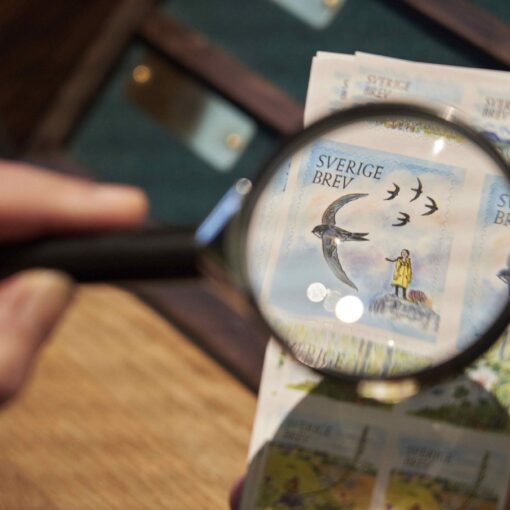 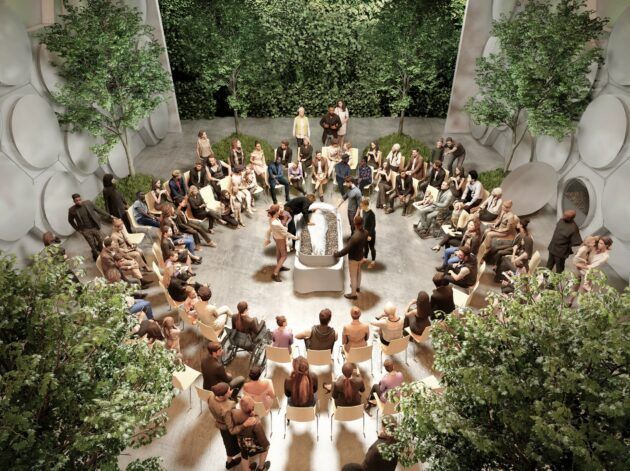 skynesher/Getty Images The CDC is recommending against any travel, no matter how limited, for Thanksgiving this year. If you are eating Thanksgiving […]