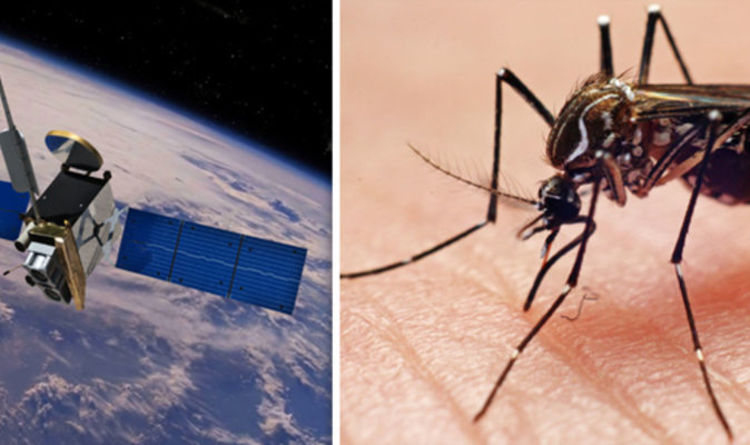 The project, under the umbrella of the UK space agency and led by hydraulics research station HR Wallingford, involves a consortium including the London School of Hygiene and Tropical Medicine, the Met Office and Oxford Policy Management International Partners, as well as the World Health Organisation (WHO) and other experts.

It will make use of Earth Observation techniques, which combine data compiled from space with measurements taken on the ground to make educated guesses about the spread of the flu-like illness, which can prove fatal.

A UK Space Agency spokesman said: “Dengue fever is the most rapidly spreading, mosquito borne, viral disease in the world.

“Since 2000, there has been an increase of over 100 percent in the number of cases of dengue fever in Vietnam alone.

“Dengue fever occurs in 141 countries, including Vietnam, where there is currently no system to forecast the probability of future dengue outbreaks.

“This project will provide a tool giving advance warning, of several months, of likely dengue outbreaks.

“This will greatly assist public health authorities to mobilise resources to those most in need.

“The same methods could also be used to forecast outbreaks of Zika, which has recently begun to be reported in Vietnam.”

The project will make use of Earth Observation EO) techniques, which combine data compiled from space with measurements taken on the ground to make educated guesses about the spread of the illness.

The spokesman added: “This is the first time a dengue prediction tool will have been designed that links Earth Observation products and hydro-meteorological variables to vector-borne disease incidence at a local scale.

“The Earth Observation based forecasting system will allow decision makers to identify areas of high risk for disease epidemics before an outbreak occurs, in order to target resources to reduce epidemic spreading and increase disease control.

“The project will also provide projections of dengue fever under a range of climate change scenarios.”

Zika is spread by the same species of mosquito as Dengue fever, and can caused microcephaly in the babies of pregnant women contracting the virus.

In May, the LHSTM’s Professor Ron Behrens told Express.co.uk the world needs to be prepared to cope with outbreaks of Zika, Ebola and other deadly viruses as they migrate around our increasingly connected world.

He warned: “There have already been examples of vectors taking a disease from one part of the world to another.

“Dengue fever, for instance, originated in Asia, but has spread to South America because as a result breeding in water inside tyres which were shipped there.

“These things are happening and they can happen again.”

“The Zika virus could well spread to Southern Europe, which why public health and surveillance bodies have got to catch these outbreaks early.”

The WHO still isn’t describing covid-19 as a pandemic

Five things we have learned about Mars from NASA's InSight mission

Photos show what Italy is like under lockdown as the country became Europe's epicenter of the coronavirus with more than 200 cases reported in...