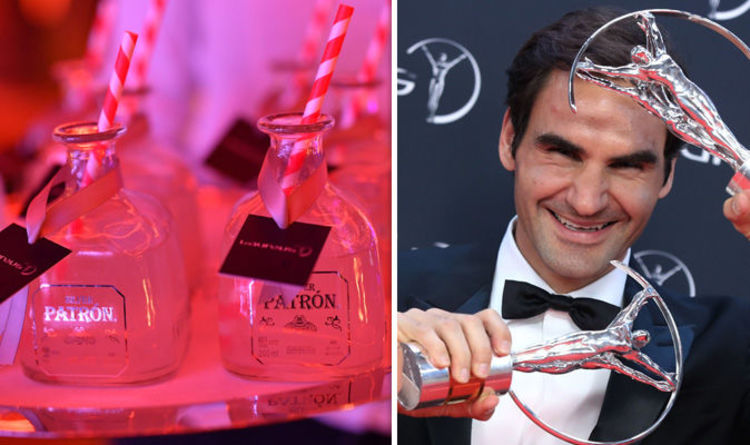 Federer won his fifth and sixth gongs at the glitzy Monaco event last night, taking the accolades for Comeback of the Year and Sportsman of the Year, the gala event’s central prize.

The Swiss could not contain his emotion on stage, thanking presenter Martina Navratilova for her inspirational career before paying tribute to great rival Rafael Nadal with tears in his eyes.

But that did not stop Federer, who arrived on the red carpet without wife Mirka but instead flanked by Mercedes-Benz chairman Dieter Zetsche and was also joined by coaches Severin Luthi and Ivan Ljubicic, taking full advantage of the opportunity to celebrate.

Express Sport understands that the 36-year-old was one of the last to leave the afterparty at Jimmyz Nightclub, where guests were served a range of bespoke cocktails commissioned and curated by exclusive spirits sponsor Patron Tequila, including a Patron Laureus Punch.

The party, which had a guest list of around 500, petered out at 4am – when Federer was one of the last standing, along with former Swiss cyclist Fabian Cancellara.

Both men were by no means the only high-profile stars in the nightclub, with the Prince and Princess of Monaco in attendance as well as event host Benedict Cumberbatch, Sir Chris Hoy, Roger Federer, Boris Becker, Luis Figo, Brian O’Driscoll, Steve Redgrave and Victoria Pendleton.

Earlier, Federer had almost broken down crying on stage while paying tribute to rival Rafael Nadal, who is currently nursing a leg injury and was not in attendance on the night.

“Thank you to my rival Rafa,” said Federer.

“I wanted to give a shoutout to him. He had an unbelievable year himself. We had a great battle and it’s because of a guy like him, I think I’m a better player.

“He could very well be here tonight standing here with this award because he’s an incredible player, incredible friend and incredible athlete.”

He added: “This is a very special moment for me.

“Everyone knows how highly I value my Laureus Awards, so to win another would have been wonderful, but to win two is a truly unique honour.

“I am delighted and I would like to thank the Laureus Academy for all their support.

“It was an unforgettable year for me, to come back after a very difficult difficult 2016 and these Awards just make it even more memorable.

“When I won my first Laureus Award back in 2005, if you had said I would have ended up winning six I would not have believed you.

“It’s been an amazing ride.”

How a yellow jersey is dividing Bolsonaro's Brazil