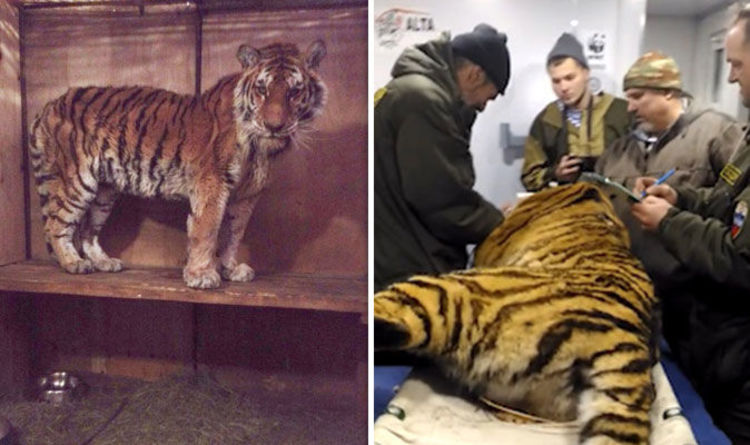 The Siberian tigress, believed to be about 10-years-old, was found by a villager on his doorstep in the far-eastern Russian Khabarovsk Krai region on January 28 and they raised the alarm with staff at the Amur Tiger Centre.

Initially, they had been optimistic that they might be able to help the badly malnourished big cat after taking her to a rehabilitation centre in the Primorsky Krai region, but it has now been confirmed that after initially rallying and even climbing around in her new cage, her condition worsened and she later died.

Experts at the centre confirmed that the tigress had been suffering from severe tooth decay with no upper teeth, as well as gum problems. They treated her by providing her with mashed food to build up her strength.

At first, experts thought that she was around five, but later they confirmed that she was more likely around 10.

The General Director of the Amur Tiger Centre, Sergey Aramilev, said: “Our experts did everything they could but she was simply too old and too sick to recover in time.”

They confirmed that the tigress, who by the time she was found had no reserves of fat, stopped eating food on February 7 and died on February 9.

The Amur Tiger Centre was set up following an initiative by Russian President Vladimir Putin and is dedicated to the preservation and research of the endangered Amur tiger population.

Numbers have increased in recent years, although there are only around 500 still alive in the wild.

Trump in India: A brief history of US presidents' trips

Democratic outreach to Nevada AAPIs lagging, some say, though group has grown 167% in 10 years

February 21, 2020
BEIJING/SEOUL (Reuters) - The coronavirus has infected hundreds of people in Chinese prisons, authorities said on Friday, contributing to a jump in reported cases...

More than half of all coronavirus cases outside China are from...