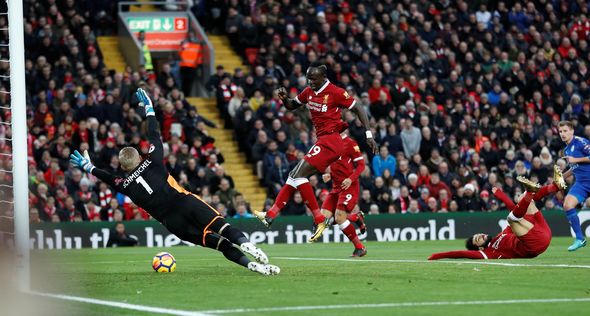 28: Sean Dyche’s side are dominating here. Huddersfield seem to be surprised by Burnley’s positive tactics as Arfield glances a header well wide after meeting Gudmundsson’s in-swinging cross in the area.

24: Is this a training exercise? Chelsea have scored their THIRD inside 25 minutes. Pedro receives the ball from Willian and fires low into the far corner.

25: Analysis from our reporter Ian Murtagh, at St James’ Park.

The French flyer has been the best player on the pitch so far with some forceful bursts upfield. The visitors are more than holding their own in the early stages at Gallowgate.

Right now, Newcastle are playing like a team who haven’t picked up a point at home since October 21.

23: Disallowed goal! Sadio Mane converts Robertson’s whipped cross but he’s a fraction offside. And there’s another sitter for Salah. Firmino threads the Egyptian through and he’s sent it wide with a chipped effort. It’s ALL Liverpool here. 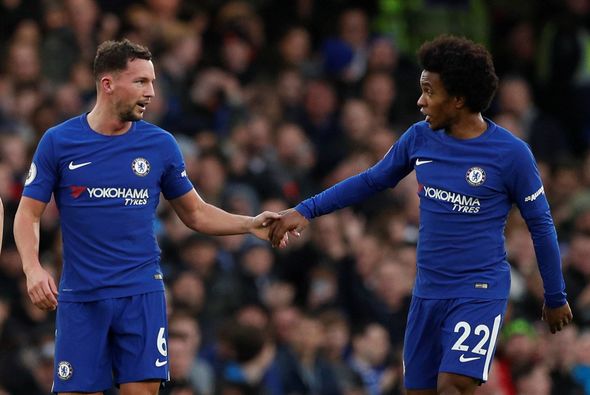 17: Liverpool’s response? Well, aside from Salah’s miss there’s not been a great deal. Coutinho just cut inside from the left flank but Schmeichel saved comfortably.

14: Great chance! Willian releases Morata, the Spaniard races towards goal but is denied by a brilliant Butland save. Drinkwater then crashed a half-volley over the bar as the corner was headed away.

11: Painful. Having started brightly, Carlos Carvalhal’s side find themselves trailing. Richarlison’s shot is parried up into the air and following up is Andre Carrillo to head in the rebound.

9: Wow, what a strike. Danny Drinkwater nets his first goal for Chelsea in some serious style. Drinkwater controls a looping ball on his knee and guides his shot into the corner from 20 yards. 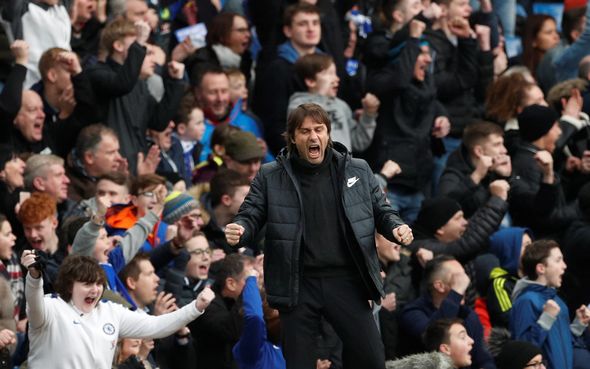 9: Waste! Liverpool should be level after Sadio Mane serves it on a plate for Salah, who inexplicably blazes wide.

7: Carlos Carvalhal almost has a dream start to life at Swansea. Ayew wins the ball off Doucoure and advances towards the edge of the area before rattling the cross-bar.

4: The inevitable has happened. Antonio Rudiger gets up and meets Willian’s whipped free-kick with a powerful header. Could be a long afternoon for Stoke…

3: What a start! Leicester scythed through the Liverpool defence with Riyad Mahrez passing across the six-yard box for Jamie Vardy to finish.

2: It didn’t take long for Chelsea to have their first opportunity of the afternoon. Rudiger goes close when heading a corner goalwards but one of the million bodies Stoke have in the area clear.

1: We’re underway around all of the Premier League grounds now folks. I’m predicting a bag full of goals today! 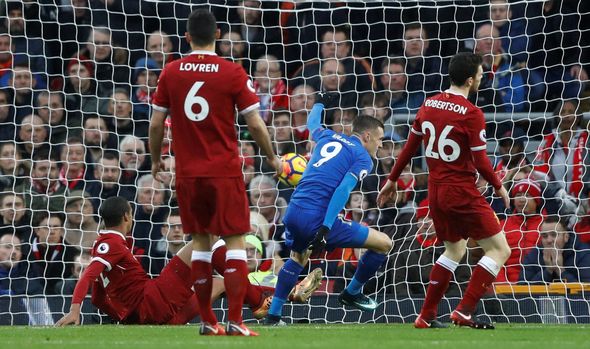 14:55: Huge round of applause for Virgil van Dijk as he takes his seat in the directors box.

14:50: Analysis from our reporter Ian Murtagh, at St James’ Park.

The last time Brighton boss Chris Hughton was on Tyneside a month ago  he was given a standing ovation by a 500-strong audience at a talk-in , such is the affection he’s still held in by the Geordie nation.

But his popularity may take a knock if the Seagulls manage to complete the double over the side who  pipped them for the Championship title in May.

They won 1-0 on the South Coast in September and another Brighton win today would open up a six point lead over Newcastle.

Rafa Benitez’ side have lost their last five on home soil – their worst run since 1953 when they lost six in a row.

The Toon chief has made seven changes from the side which parked the bus in the 1-0 midweek defeat against Manchester City – and with both Dwight Gayle and Joselu in the starting line-up, it’s a far more attacking Newcastle side which kicks off this afternoon. 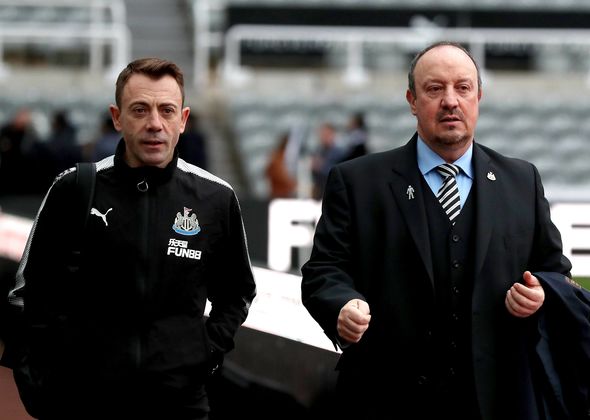 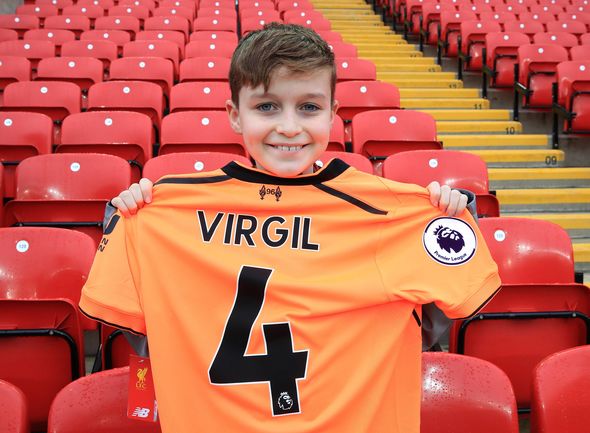 14:45: I’m not sure If you’ve heard, but Liverpool signed Virgil van Dijk for £75million the other day…

Not like Jose to play mind games with an opposing manager…

Asked about Van Dijk’s move at his press conference yesterday, Mourinho said: “I think the one to speak about it in a specific way has to be Jurgen. If I was one of you I would ask him about his comments about one year ago (when Pogba signed).

“Not speaking specifically about (the Van Dijk) case because in Liverpool they do what they want, and I am nobody to comment about what they do, (but) the reality is if they think the player is the right player for them, and they really want the player, they pay this amount or they don’t have the player. That’s the way the market is.” 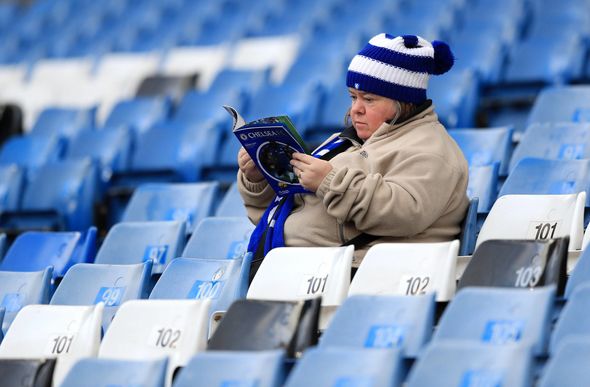 14:40: The Premier League’s most recent managerial appointment was a surprise given Carvalhal left Sheffield Wednesday on Christmas Eve following a seven-game winless run.

The Portuguese has been parachuted into a top-flight relegation battle as his new team are five points from safety ahead of a trip to Watford. The Swans have lost nine of their past dozen contests and are in desperate need of the new manager bounce that Crystal Palace, Everton, Leicester and West Ham all got.

14:35: The previous five Premier League meetings between Everton and Bournemouth have produced 22 goals (4.4 per game) – Everton scoring 13 of those and Bournemouth netting nine. But Sam ‘respect the point’ Allardyce hasn’t been around for any of those games…

REASONS TO BE FEARFUL

14:30: Mark Hughes’ Potters have suffered defeats to Chelsea, Manchester City, Liverpool and Tottenham this term, conceding 19 goals in the process.

Furthermore, they are visiting Chelsea without three centre-backs – Ryan Shawcross, Bruno Martins Indi and Kurt Zouma – and Erik Pieters is not be fit to feature at left-back.

Alvaro Morata will be licking his lips… 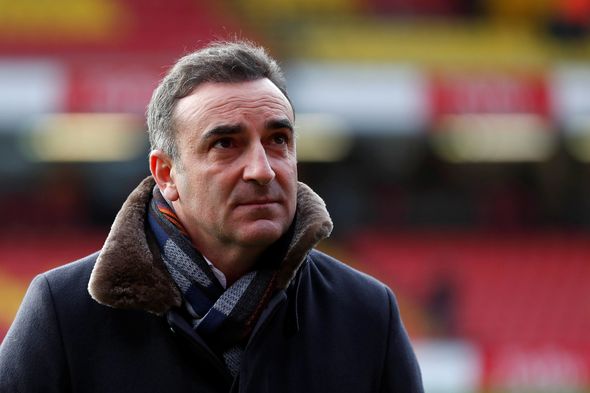 14:20: New manager Carlos Carvalhal has made a few changes for his first game in charge. Unsurprisingly Tammy Abraham returns to the starting XI having missed out during the 5-0 drubbing to Liverpool. 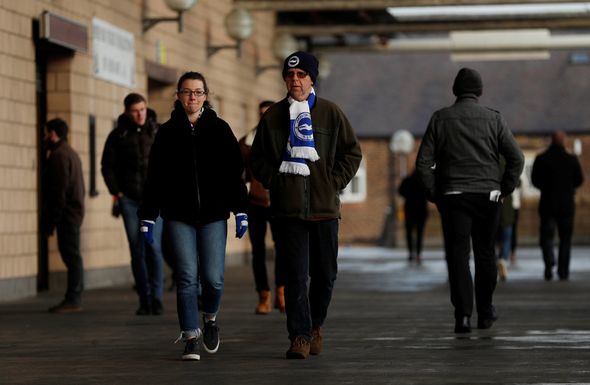 14:15: Charlie Daniels, who missed two games with a groin injury, starts on the bench for Eddie Howe’s side. There’s also a rare appearance for Everton’s James McCarthy.

14:10: And here’s your line-ups. Our reporter Ian Murtagh will be bringing all the latest and greatest  from St James’ Park. 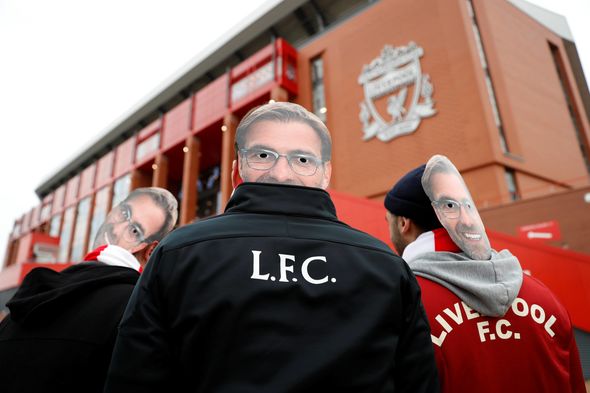 14:05: Antonio Conte has made the brave decision to drop Eden Hazard. Fantasy Football managers will be crying their eyes out.

14:00: And here’s the line-ups for today’s clash at Anfield folks. I can see a couple of changes with Loris Karius and Joe Gomez replacing Simon Mignolet and Trent Alexander-Arnold. 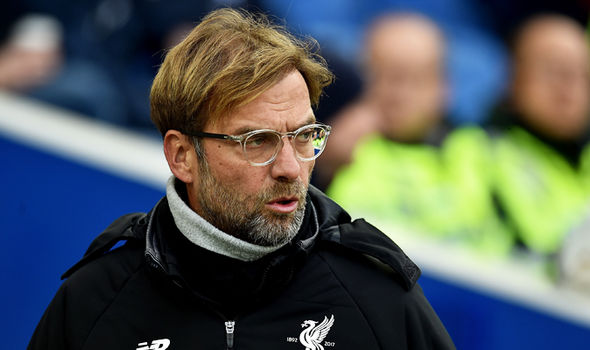 13:55: If you want to vent your frustrations, or discuss any issues in the world of football (within reason), then get in touch!

13:50: Welcome to our LIVE coverage of the Premier League.

We’re at Anfield today as Liverpool look to follow up Boxing Day’s thumping of Swansea with another positive result against Leicester.

And they might just be buoyed by the £75million signing of Virgil van Dijk, who will be watching from the stands.

Elsewhere Chelsea and Everton are looking to maintain their unbeaten runs while Newcastle and Brighton go head-to-head at St James’ Park.

It’s a festive buffet of football, and I’ll be your chef…

No idea what I meant by that. 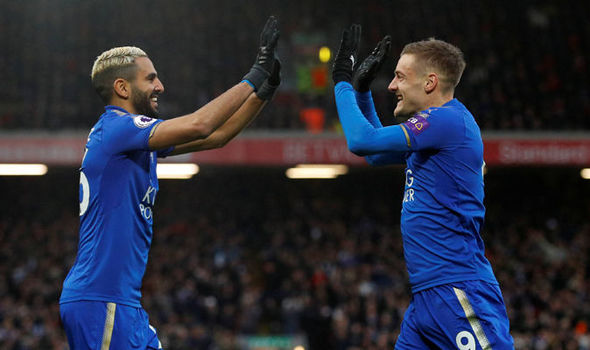 Liverpool captain Jordan Henderson remains unavailable. He missed the Boxing Day win over Swansea with a hamstring injury and no date has been put on his return. Left-back Alberto Moreno could miss another three games with ankle trouble.

Chelsea will remain without David Luiz and Charly Musonda. Luiz is struggling with a knee problem while Musonda has a groin injury.

Stoke boss Mark Hughes has a defensive crisis to solve with Ryan Shawcross, Bruno Martins Indi and Kurt Zouma all out. Glen Johnson (knee) is also unavailable but full-back Erik Pieters could feature.

Newcastle keeper Rob Elliot is out through injury. The Republic of Ireland international will sit out the game with a thigh problem and will be replaced by Karl Darlow. Midfielder Isaac Hayden is available after shaking off the knock which has kept him out of the last two games.

Izzy Brown returns to the Brighton squad. The on-loan Chelsea forward was ineligible to face his parent club in Albion’s 2-0 defeat at Stamford Bridge on Boxing Day. Boss Chris Hughton has a full-strength squad with the exception of long-term absentee Steve Sidwell.

Bournemouth manager Eddie Howe will give a number of players late fitness checks.

Everton’s top scorer Wayne Rooney is available having recovered from the illness that ruled him out of the last two games.

James McCarthy, who has not made a first-team appearance since October due to a hamstring injury, should be fit for selection as well, but Idrissa Gueye (hamstring) remains a doubt. 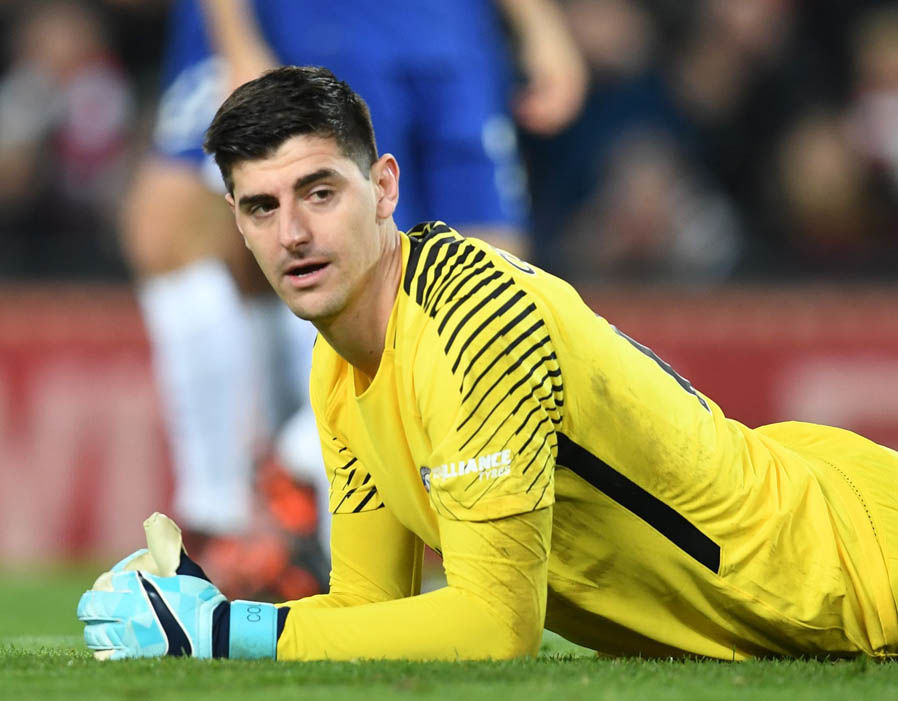 Who could Chelsea sign in January if Thibaut Courtois joins Real Madrid?

Huddersfield defender Chris Lowe hopes to recover from an ongoing foot problem in time to face the Clarets. Left-back Lowe sustained the injury in the recent win at Watford, but was forced off late on in the home draw against Stoke on Boxing Day. Head coach David Wagner has no new injury or suspension concerns.

Burnley expect to be without several first-team regulars. James Tarkowski completes a three-match suspension, left-back Stephen Ward (knee) is out and striker Chris Wood (leg) is not likely to be fit. Robbie Brady (knee) and Tom Heaton (shoulder) are long-term absentees.

Watford will check on midfielder Roberto Pereyra who was taken off just before half-time in the Boxing Day win over Leicester because of a leg muscle problem. Captain Troy Deeney is in the middle of a four-match suspension.

New Swansea boss Carlos Carvalhal could have Wilfried Bony available for the trip. Bony has missed the last two Premier League games with a hamstring injury suffered in Paul Clement’s final match in charge. Tammy Abraham could return to the starting line-up but Ki Sung-yueng (calf) and Kyle Bartley (knee ligaments) are likely to miss out. 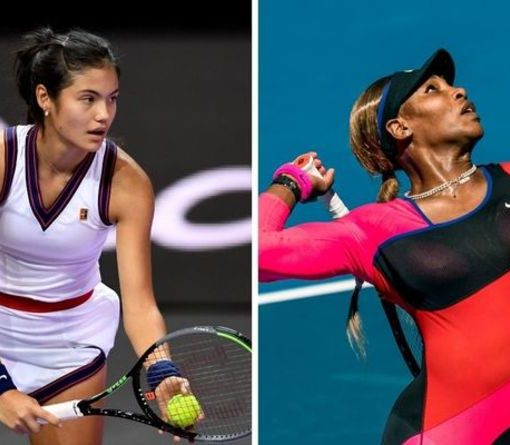 “If Raducanu can build on the fantastic start to her tennis journey, why can’t her impact at Wimbledon and for Great Britain […]

It was a bittersweet Christmas for me. Having not been selected in the squad for Brighton’s game at Chelsea, I was afforded, […] 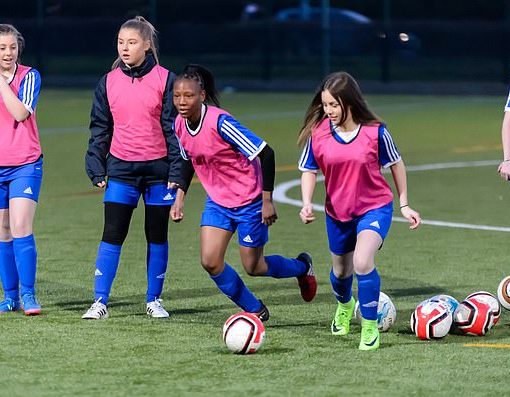