Kansas City Chiefs coach Andy Reid is not an impulsive man. He learned at the feet of Mike Holmgren, a coach who could be maddening at times in his devotion to an offense he trusted and the players he believed would make it work. Holmgren didn’t bench many players if they had a few bad weeks and Reid has rarely done the same himself.

But even Reid can’t sit patient watching his offense stagnate as his team stumbles into an abyss from which it may not recover this season. On Sunday, Kansas City lost for the fifth time in six games with a dismal 16-10 home loss to Buffalo. A team that started the season 5-0 with big victories over New England and Philadelphia, and seemed like a true Super Bowl contender are now 6-5 and in first place in the AFC West by the grace of a dreadful division.

If they keep playing the way they have for the last few weeks they will even squander that.

Reid’s quarterback, Alex Smith, has been a solid and sometimes underappreciated leader. He took Kansas City to within two games of the Super Bowl last season and looked ready to go deep in the playoffs this winter. But Smith has been sluggish in recent weeks as the Chiefs offense has grown cold. On Sunday they converted on just two of 13 third downs. Nobody can win with numbers like those.

And now will come the calls for Reid to replace the 33-year-old Smith with Patrick Mahomes, the Texas Tech quarterback they traded up to get with the 10th overall pick in this year’s draft. After all, if Smith can’t move Kansas City any better than he has lately, wouldn’t Mahomes be worth the shot?

“That’s not where I am right now,” Reid told reporters after Sunday’s game.

The surprise would be if Reid seemed open to the idea. The record of the top quarterbacks picked this year is not inspiring. Chicago were laughably conservative when they started playing second overall pick, Mitchell Trubisky, once letting him throw just seven passes. On Sunday, throwing 33 times he was intercepted twice. DeShaun Watson the 12th pick, played brilliantly for Houston before going down with a season-ending injury. DeShone Kizer, a second round selection by Cleveland, has been inconsistent though much of that might have to do with the fact the Browns haven’t given him much to work with. Playing Mahomes is a risk Reid does not appear to want to take.

In many ways, he is doing the right thing. Too often teams are impatient with top quarterback prospects, rushing them onto the field simply because they were first-round picks. Playing Mahomes now might ruin him. And yet, why would Kansas City move up in the draft if they weren’t going to use him? At this point, they may not have a choice. How much farther can they fall?

The Chiefs don’t have a winning team left on their schedule. Given the state of the AFC West they could probably squeak into the postseason by winning two more games. But to what end? To lose their first playoff game and start the clock next spring on a quarterback they have yet to test?

Reid has shown an amazing ability to tune out criticism for much of his coaching life. Will he be able to resist the swell about to come his way?

Fantasy player of the week

Julio Jones. When he breaks open, Jones is the NFL’s most dynamic player. The Falcons receiver has not been as explosive this season. He came into Sunday’s game with Tampa Bay with just one touchdown on 86 targets. But he grabbed a sinking toss on a trick play from fellow receiver Mohamed Sanu for a touchdown early in the second quarter then caught a 25-yard scoring pass from quarterback Matt Ryan a few minutes later.

For the day, he had 12 catches for 253 yards and two touchdowns as the Falcons solidified their playoff hopes with a 34-20 victory.

Five. The number of consecutive games in which Jets receiver Robby Anderson has caught a touchdown pass. Anderson, who was born in Fair Lawn, New Jersey, less than 10 miles from the Meadowlands, has been a great find for New York – a franchise that hasn’t had many wonderful discoveries in recent years. Coming out of Temple, he went undrafted two years ago and got into 10 games last season with modest success after signing with the Jets. This season he has been outstanding with 46 catches for 714 yards.

On Sunday, he caught six passes for 146 yards and two touchdowns against the Carolina Panthers. Unfortunately for the Jets, they gave up a fumble and punt return for touchdowns in 3:04 in the fourth quarter and lost 35-27 to the Panthers, who are quietly 8-3.

Never assume anything when Bill Belichick is coaching against you. The Miami Dolphins appeared to have stopped the Patriots’ first drive of Sunday’s game on three plays and with the ball on New England’s 27 the last thing they were probably thinking was a fake punt on 4th and 9. So, of course, that’s exactly what Belichick called. It worked beautifully, safety Nate Ebner took a short snap, sprinted right and ran 14 yards for a first down. Four plays later, the Pats scored a touchdown and went on to a 35-17 rout.

Actually, the play didn’t work perfectly. Ebner injured his knee on the play and hobbled off to the locker room. Perhaps that’s why the fake punt was the Patriots first in 13 years.

“I think the guys are starting to see Jared mature week in and week out” – Rams coach Sean McVay on quarterback Jared Goff after the Rams’ 26-20 victory over the Saints.

If it wasn’t clear before it should be obvious now that the Rams are for real. The Saints came into Sunday as perhaps the league’s hottest team, with an unstoppable offense. Only on Sunday, LA slowed the New Orleans offense sacking Drew Brees three times and holding the Saints’ powerful running game to just 123 yards – 74 of which came on just one play.

Sunday’s game was possibly a preview of a playoff matchup, an unimaginable thought before the start of the season. Both teams are in first place in their divisions with 8-3 records and have enough balance to keep from collapsing in the final month. But the biggest development for LA is Goff’s continued improvement. Against the Saints he threw for 354 yards and two touchdowns, spreading passes to eight receivers. If he continues to play this well the Rams – who have eight wins for the first time since 2006 – could go a long, long way. And who would have thought that?

–There was a sickening loss for Green Bay in Pittsburgh. Brett Hundley has looked badly out of sorts since stepping in for the injured Aaron Rodgers but found his feet – and the endzone – against one of the league’s best teams. Hundley threw for three touchdowns on Sunday night and several of his heaves downfield were passable impressions of Rodgers. But the Steelers hung in there and Chris Boswell, whose evening started with a missed extra point, kicked a 53-yard field goal as time expired to give the home team a 31-28 victory. It was the longest field goal in Heinz Field’s 16-year history.

–Joe Mixon ran for 124 yards and a touchdown as Cincinnati kept Cleveland winless with a 30-16 victory. Bengals quarterback Andy Dalton continued his revival with 214 yards and two touchdown passes.

–Marcus Mariota was intercepted twice and had a passer rating of 69.4 but Tennessee still managed to beat Indianapolis 20-16 behind a defense that sacked Colts quarterback Jacoby Brissett eight times.

–Quarterback Jimmy Garoppolo finally got into a game for San Francisco almost a month after he was traded from New England. He completed both of his passes, one for a touchdown in the Niners 24-13 loss to Seattle.

–Oakland running back Marshawn Lynch had 67 yards rushing and a touchdown just days after President Donald Trump called for him to be suspended for standing for the Mexican national anthem but not the US’s last week. The Raiders cruised to a 21-14 victory over Denver in a game that will mostly be remembered for a rolling brawl. 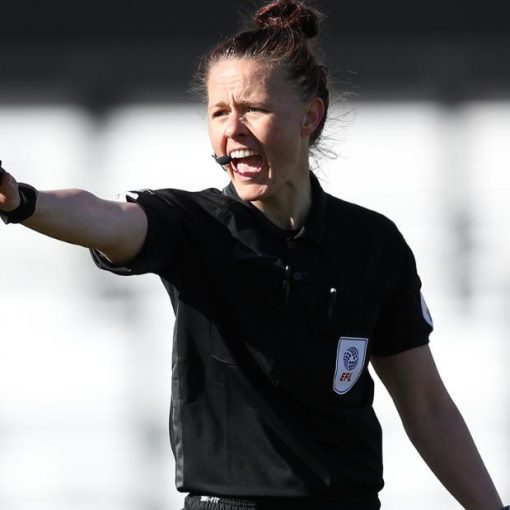 The 37-year-old, who has previously refereed high-profile women’s matches, oversaw Port Vale’s 2-0 win against Harrogate Town in the third tier of […]