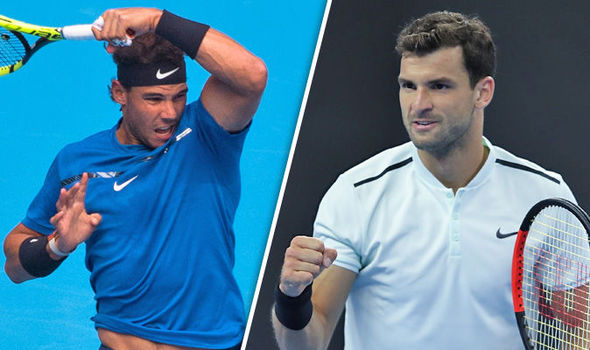 If their previous meetings are anything to go by, this should be an open-and-shut case for the winner: Nadal has only lost once to Dimitrov in their nine meetings.

However, that solitary defeat came at the quarter-final stage of this very tournament last year and in straight sets. Shortly after another defeat in Shanghai followed for Nadal and he subsequently took a break from the game to deal with an injury.

But both players appear fully fit for this clash which promises to pit two of the world’s form men against each other.

Wow! Dimitrov storms into a 0-40 lead but Nadal pins him back to deuce with some excellent baseline tennis. Dimitrov goes for a lob that goes long. Advantage Nadal. And he takes the game was a monstrous forehand that Dimitrov just can’t reach.

Dimitrov hits back with a game of his own but he needs breaks here if he is to reach the China Open final.

That’s a game to love for Nadal. This is routine at times.

Dimitrov storms into a 30-0 lead but Nadal successfully challenges an ace to claw a point back. The Bulgarian then nets and we eventually go to a third straight deuce. Dimitrov saves a break point, then a second. But a third goes awry and Nadal goes 3-0 up.

Dimitrov responds with a glorious cross-court back hand to go 0-30 up. Nadal brings it back level with a slice drop shot but then nets. Break point… but it’s saved. Deuce again. Nadal gets the advantage and then places one down the line. Daylight.

A lovely cross forehand from Nadal sets up two break points for the Spaniard at the start of this third set. Dimitrov saves the first and the second is a lovely flat forehand for deuce. But Nadal breaks after a second advantage, Dimitrov slipping before failing to return a shot. 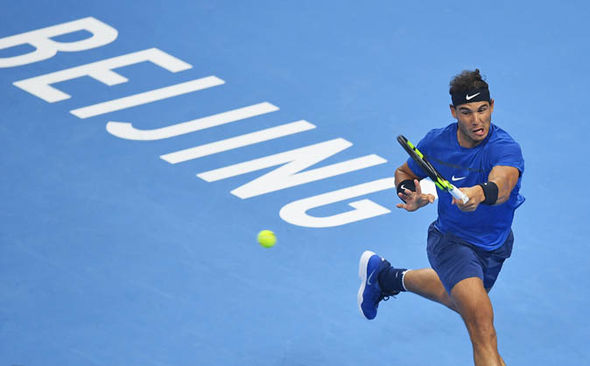 A bad backhand miss from Nadal, ricocheting off the top of the net, brings up set point Dimitrov but he can’t convert. There are still unforced errors though and a second comes, Nadal tries to play a drop volley but Dimitrov runs it down! Brilliant! Game on! Phwoar!

*Nadal 6-3, 4-5 Dimitrov: There is a spring in Dimitrov’s step now after a love hold. There is an air of confidence about him that wasn’t there before which is as important as how he’s playing.

Nadal 6-3, 4-4 Dimitrov*: Nadal is rediscovering his form slowly, proving as much with a curving forehand pass at 0-15. The backhand is returning too and his defence is relentless. Holds to 15.

*Nadal 6-3, 3-4 Dimitrov: The comeback continues! Dimitrov holds well but the match is still being played off Nadal’s racket really. His backhand is misfiring at the moment and you feel if Dimitrov is to get anything from this match, he needs to strike now, before the beast re-awakens.

Nadal 6-3, 3-3 Dimitrov*: So near and yet so far. Dimitrov gets himself another break point and goes for broke on the return, leaking inches long.

He gets a second chance to break – the unforced errors are creeping in for Nadal – but a poor switch to slice backhand from Dimitrov gets him in trouble.

Another Nadal unforced error gives him chance No 3…and he takes it this time! Back on serve and that has been a two-game slide of intensity from Nadal in my book.

*Nadal 6-3, 3-2 Dimitrov: A good hold from Dimitrov but almost every point is costing him bags of energy just to keep up with Nadal. 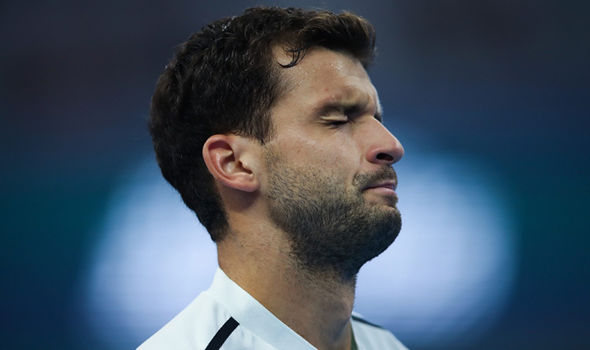 Nadal 6-3, 3-1 Dimitrov*: Dimitrov forces a break point for the first time in the second set with a brilliant winner after a long rally – usually Nadal’s department, that – but the world No 1 gets out of trouble with his relentlessly accurate serving.

*Nadal 6-3, 2-1 Dimitrov: A wild forehand at deuce brings up break point but then a beaut of a winner saves it. An ace, his first of the match, gives him a door out of the game only for Nadal’s baseline work to peg him back again.

Dimitrov holds eventually though. Trying to prove he isn’t out of this yet.

Nadal 6-3, 2-0 Dimitrov*: We get to 30-30 and Dimitrov charges to the net with Nadal on the run. However, the Spaniard almost scoops a double-handed backhand across the bows of Dimitrov to win the point in sensational fashion.

A reflex winner from Dimitrov forces deuce but he can’t turn it into a break point.

*Nadal 6-3, 1-0 Dimitrov: This match has not been put to bed but it’s definitely been given a warm cocoa and some fresh pyjamas.

Nadal breaks to love at the beginning of the first set and Dimitrov looks a little panicked.

The first of two set points is all Nadal needs and that’s a 35-minute set with only one break. Nadal is not known for fast matches but when you’re that dominant, you get things done quickly.

*Nadal 5-3 Dimitrov: So Nadal will at least have to serve for the first set. Can’t imagine that will be much of a problem though – he’s been exemplary on serve so far this set.

Nadal 5-2 Dimitrov*: Break points for Dimitrov! The first one goes when Nadal drops a sumptuous forehand into the vacant court before the Spaniard crushes a backhand cross-court to make it deuce. Brilliant hitting.

A breathtaking rally sees Nadal run down another drop shot and he converts with an amazing volley. Dimitrov isn’t playing badly but blooming heck that’s good from Nadal.

*Nadal 4-2 Dimitrov: That will give the Bulgarian some confidence with a love hold. Good work, Grigor.

Nadal 4-1 Dimitrov*: 16 minutes gone and Nadal has yet to lose a point on serve.

Dimitrov needs a hand-hold in this match or he will be skidding down the cliff.

*Nadal 3-1 Dimitrov: Woof. Dimitrov thinks he’s in the point at 15-15 but Nadal predicts cross-court backhand brilliantly and whacks a winner down the line.

It happens again two points later and a break point follows – Nadal converts immediately. Brutal stuff from the world No 1. What a mental challenge for Dimitrov this is going to be.

Nadal 2-1 Dimitrov*: Good rhythm on the Nadal serve already as he gets a second love hold, including a rather speculative drop-shot from Dimitrov that hits the net. That looks like an effort to bring Nadal closer to the byline.

*Nadal 1-1 Dimitrov: Dimitrov holds to 15 to get himself on the board. A nice settler for the world No 8.

Nadal 1-0 Dimitrov*: The roof is shut in China because it’s pretty wet out there so the applause for Nadal’s first winner echoes around the stadium.

Nadal is expected to target Dimitrov’s single-handed backhand off his serve and does so successfully at 30-0 and 40-0. Love hold.

9.35am: Dimitrov and Nadal out on court, knocking up as we speak. Minutes away. 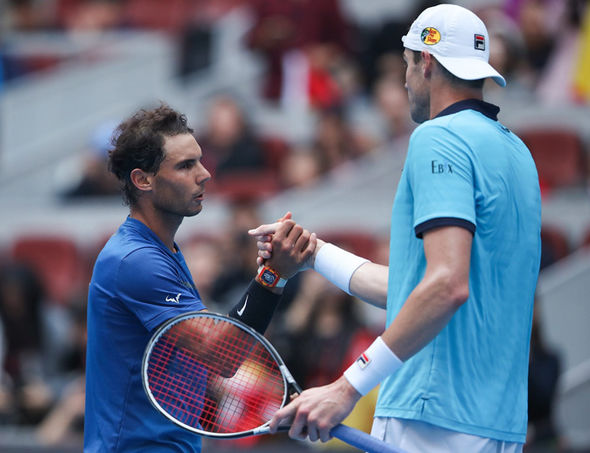 Rafael Nadal dispatched John Isner in the previous round

9.15am: Nadal has been in pretty good form in China although it was not a perfect start.

The Spaniard dropped his first set of the tournament to Lucas Pouille but eventually came through to win 4-6, 7-6, 7-5.

Since then, it’s been plain sailing with wins over Karen Khachanov and John Isner with his eyes firmly set on a fourth China Open final.

And he is moments away now – Halep has taken the second set and a win over the No 8 seed to book her place in the final.

9am: So we are expecting Nadal and Dimitrov on court no earlier than 9.30am but we could start later than that – especially if French Open champion Jelena Ostapenko digs her heels in. The Latvian is on the main court before the men’s semi-final and while she lost the first set to No 2 seed Simona Halep, she is fighting at 4-4 in the second.

Assuming they do get done in time though, we’ve got about half an hour until the men’s world No 1 takes to the court. 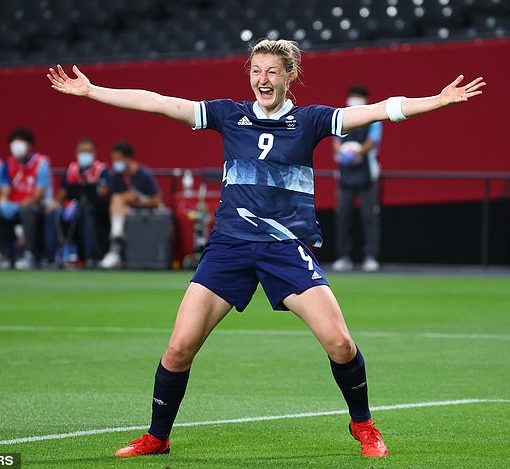 Team GB has got talent. They knew it when they performed a variety show for kicks in the team hotel and they […]

When Grant McCann first met Frank Lampard he felt like an impostor. The pair were teenage midfielders at West Ham with big […]

There used to be two shops in Birmingham called Tyseley Pet Stores. While in one advert they boasted of their stocks of […]