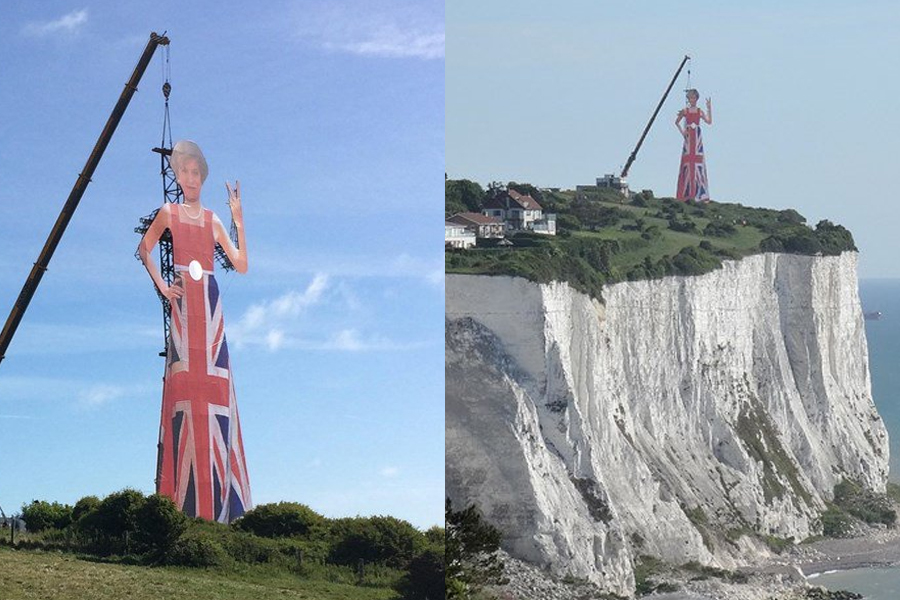 We cannot be sure how a rather rude and large effigy of the British Prime Minster appeared on the “white cliffs of Dover”, but it must have taken an awful lot of effort and the use of a crane and some skill and knowledge of scaffolding.

The scaffold which was bearing an image of Theresa May complete in Union Flag skirt together with a very rude hand gesture, which suggested to anyone watching from across the channel, that it should go away. Of course every school pupil knows that the iconic white cliffs are the nearest point and the closest British landmark to continental Europe and the first sign of England that many sea-faring visitors see. Indeed as we have seen on newsreels and black and white photographs, images of Adolf Hitler peering through field glasses at the cliffs across the 22 mile stretch of water. Calais is the nearest port which is 27 miles (43 km) northwest of Calais in France to Dover, a regular route for cross channel ferries. Dover a town that overwhelming voted by a margin of 2 to 1 to leave the European Union in last year’s referendum and the cross channel port has seen the some of the highest levels of immigration from the EU.

Now of course as we should all know now, Mrs May has promised that we will be leaving the EU and that Brexit will be delivered, although she did suffer a setback in the recent General Election. Now the structure which appeared seems to be a mystery, but it did tower over trees and nearby buildings, in addition it had been cleverly doctored to show a smiling Prime Minister flashing a V-sign with her left hand; not the sort of thing that to be expected from a vicar’s daughter!

Of course we could see from newsreels and pictures that wartime leader Winston Churchill famously used the “V” sign, but this was with palm facing outwards is a sign of peace or victory, however when the back of the hand is outward, it is a cruder sign clearly designed to be indicate contempt. It is not the first time that the “V” sign has been used, famously the Sun newspaper used it on the front pages of the paper in 1990 which at the time read: “Up Yours, Delors,” who, at the time was President of President of the European Commission, the paper invited readers to tell Jacques Delors to “frog-off” over his plans for European integration.

Recently our friends in Germany used the Union Flag or Union Jack to many, to light up the famous Brandenburg Gate as a mark of respect and solidarity with the Britain after an attack in London Bridge by militants that left 7 dead in the recent attacks.

No matter which way people voted in the referendum, we need to remain friendly with our European neighbours; millions of us go there on holiday every year, sometimes several times a year. One local resident in Dover, Simon Hare, has expressed his views in local website Kent Online, he said that whether or not you are in agreement with Brexit, it was crass, vulgar and insulting to any Europeans coming into Dover on the ferry and a ridiculous message to send to Europe when we are about to start negotiating our exit from the EU, a sentiment we imagine shared by many.

To court Latinos, Democrats have to expand strategy in 2022

California man, 19, is arrested after being caught on camera sticking swastika stickers around town

In Japan, more people died from suicide last month than from coronavirus in all of 2020. And women have been impacted most.

The 33 best movies to watch on Disney Plus

Stimulus check qualifications can still change with a second payment. What we know